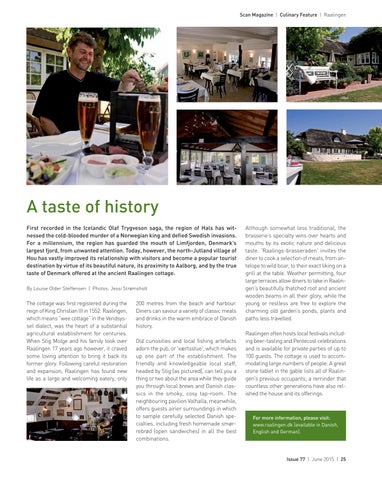 A taste of history First recorded in the Icelandic Olaf Trygveson saga, the region of Hals has witnessed the cold-blooded murder of a Norwegian king and defied Swedish invasions. For a millennium, the region has guarded the mouth of Limfjorden, Denmark’s largest fjord, from unwanted attention. Today, however, the north-Jutland village of Hou has vastly improved its relationship with visitors and become a popular tourist destination by virtue of its beautiful nature, its proximity to Aalborg, and by the true taste of Denmark offered at the ancient Raalingen cottage. By Louise Older Steffensen | Photos: Jessi Strømsholt

The cottage was first registered during the reign of King Christian III in 1552. Raalingen, which means “wee cottage” in the Vendsyssel dialect, was the heart of a substantial agricultural establishment for centuries. When Stig Molge and his family took over Raalingen 17 years ago however, it craved some loving attention to bring it back its former glory. Following careful restoration and expansion, Raalingen has found new life as a large and welcoming eatery, only

200 metres from the beach and harbour. Diners can savour a variety of classic meals and drinks in the warm embrace of Danish history. Old curiosities and local fishing artefacts adorn the pub, or 'værtsstue', which makes up one part of the establishment. The friendly and knowledgeable local staff, headed by Stig (as pictured), can tell you a thing or two about the area while they guide you through local brews and Danish classics in the smoky, cosy tap-room. The neighbouring pavilion Valhalla, meanwhile, offers guests airier surroundings in which to sample carefully selected Danish specialties, including fresh homemade smørrebrød (open sandwiches) in all the best combinations.

Although somewhat less traditional, the brasserie’s specialty wins over hearts and mouths by its exotic nature and delicious taste. 'Raalings-brasseraden' invites the diner to cook a selection of meats, from antelope to wild boar, to their exact liking on a grill at the table. Weather permitting, four large terraces allow diners to take in Raalingen’s beautifully thatched roof and ancient wooden beams in all their glory, while the young or restless are free to explore the charming old garden’s ponds, plants and paths less travelled. Raalingen often hosts local festivals including beer-tasting and Pentecost celebrations and is available for private parties of up to 100 guests. The cottage is used to accommodating large numbers of people: A great stone tablet in the gable lists all of Raalingen’s previous occupants; a reminder that countless other generations have also relished the house and its offerings.