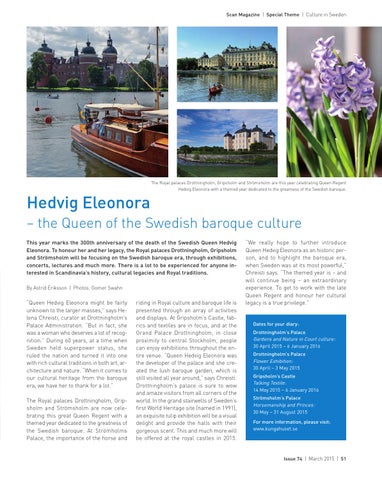 The Royal palaces Drottningholm, Gripsholm and Strömsholm are this year celebrating Queen Regent Hedvig Eleonora with a themed year dedicated to the greatness of the Swedish baroque.

Hedvig Eleonora – the Queen of the Swedish baroque culture This year marks the 300th anniversary of the death of the Swedish Queen Hedvig Eleonora. To honour her and her legacy, the Royal palaces Drottningholm, Gripsholm and Strömsholm will be focusing on the Swedish baroque era, through exhibitions, concerts, lectures and much more. There is a lot to be experienced for anyone interested in Scandinavia’s history, cultural legacies and Royal traditions. By Astrid Eriksson | Photos: Gomer Swahn

“Queen Hedvig Eleonora might be fairly unknown to the larger masses,” says Helena Chreisti, curator at Drottningholm’s Palace Administration. “But in fact, she was a woman who deserves a lot of recognition.” During 60 years, at a time when Sweden held superpower status, she ruled the nation and turned it into one with rich cultural traditions in both art, architecture and nature. “When it comes to our cultural heritage from the baroque era, we have her to thank for a lot.” The Royal palaces Drottningholm, Gripsholm and Strömsholm are now celebrating this great Queen Regent with a themed year dedicated to the greatness of the Swedish baroque. At Strömholms Palace, the importance of the horse and

riding in Royal culture and baroque life is presented through an array of activities and displays. At Gripsholm’s Castle, fabrics and textiles are in focus, and at the Grand Palace Drottningholm, in close proximity to central Stockholm, people can enjoy exhibitions throughout the entire venue. “Queen Hedvig Eleonora was the developer of the palace and she created the lush baroque garden, which is still visited all year around,” says Chreisti. Drottningholm’s palace is sure to wow and amaze visitors from all corners of the world. In the grand stairwells of Sweden’s first World Heritage site (named in 1991), an exquisite tulip exhibition will be a visual delight and provide the halls with their gorgeous scent. This and much more will be offered at the royal castles in 2015.

“We really hope to further introduce Queen Hedvig Eleonora as an historic person, and to highlight the baroque era, when Sweden was at its most powerful,” Chreisti says. “The themed year is – and will continue being – an extraordinary experience. To get to work with the late Queen Regent and honour her cultural legacy is a true privilege.”