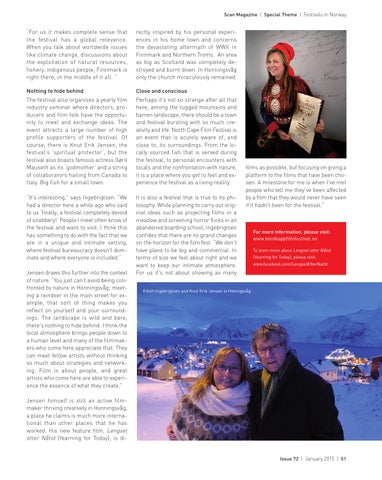 “For us it makes complete sense that the festival has a global relevance. When you talk about worldwide issues like climate change, discussions about the exploitation of natural resources, fishery, indigenous people, Finnmark is right there, in the middle of it all. ”

rectly inspired by his personal experiences in his home town and concerns the devastating aftermath of WWII in Finnmark and Northern Troms. An area as big as Scotland was completely destroyed and burnt down. In Honningsvåg only the church miraculously remained.

Nothing to hide behind

The festival also organises a yearly film industry seminar where directors, producers and film folk have the opportunity to meet and exchange ideas. The event attracts a large number of high profile supporters of the festival. Of course, there is Knut Erik Jensen, the festival&#39;s ‘spiritual protector’, but the festival also boasts famous actress Gøril Mauseth as its ‘godmother’ and a string of collaborators hailing from Canada to Italy. Big fish for a small town.

Perhaps it&#39;s not so strange after all that here, among the rugged mountains and barren landscape, there should be a town and festival bursting with so much creativity and life. North Cape Film Festival is an event that is acutely aware of, and close to, its surroundings. From the locally sourced fish that is served during the festival, to personal encounters with locals and the confrontation with nature, it is a place where you get to feel and experience the festival as a living reality.

“It&#39;s interesting,” says Ingebrigtsen. “We had a director here a while ago who said to us ‘finally, a festival completely devoid of snobbery!’ People I meet often know of the festival and want to visit. I think this has something to do with the fact that we are in a unique and intimate setting, where festival bureaucracy doesn&#39;t dominate and where everyone is included.”

It is also a festival that is true to its philosophy. While planning to carry out original ideas such as projecting films in a meadow and screening horror flicks in an abandoned boarding school, Ingebrigtsen confides that there are no grand changes on the horizon for the film fest. “We don&#39;t have plans to be big and commercial. In terms of size we feel about right and we want to keep our intimate atmosphere. For us it&#39;s not about showing as many

Jensen draws this further into the context of nature. “You just can&#39;t avoid being confronted by nature in Honningsvåg; meeting a reindeer in the main street for example, that sort of thing makes you reflect on yourself and your surroundings. The landscape is wild and bare, there&#39;s nothing to hide behind. I think the local atmosphere brings people down to a human level and many of the filmmakers who come here appreciate that. They can meet fellow artists without thinking so much about strategies and networking. Film is about people, and great artists who come here are able to experience the essence of what they create.”

films as possible, but focusing on giving a platform to the films that have been chosen. A milestone for me is when I&#39;ve met people who tell me they&#39;ve been affected by a film that they would never have seen if it hadn&#39;t been for the festival.”

Jensen himself is still an active filmmaker thriving creatively in Honningsvåg, a place he claims is much more international than other places that he has worked. His new feature film, Lengsel etter Nåtid (Yearning for Today), is di-