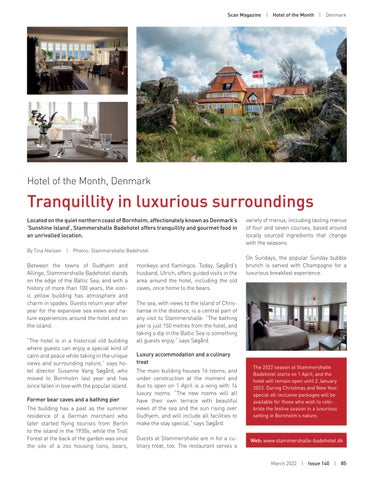 | Hotel of the Month

Hotel of the Month, Denmark

variety of menus, including tasting menus of four and seven courses, based around locally sourced ingredients that change with the seasons.

Between the towns of Gudhjem and Allinge, Stammershalle Badehotel stands on the edge of the Baltic Sea, and with a history of more than 100 years, the iconic yellow building has atmosphere and charm in spades. Guests return year after year for the expansive sea views and nature experiences around the hotel and on the island. “The hotel is in a historical old building where guests can enjoy a special kind of calm and peace while taking in the unique views and surrounding nature,” says hotel director Susanne Vang Søgård, who moved to Bornholm last year and has since fallen in love with the popular island. Former bear caves and a bathing pier The building has a past as the summer residence of a German merchant who later started flying tourists from Berlin to the island in the 1930s, while the Troll Forest at the back of the garden was once the site of a zoo housing lions, bears,

monkeys and flamingos. Today, Søgård’s husband, Ulrich, offers guided visits in the area around the hotel, including the old caves, once home to the bears.

On Sundays, the popular Sunday bubble brunch is served with Champagne for a luxurious breakfast experience.

The sea, with views to the island of Christiansø in the distance, is a central part of any visit to Stammershalle. “The bathing pier is just 150 metres from the hotel, and taking a dip in the Baltic Sea is something all guests enjoy,” says Søgård. Luxury accommodation and a culinary treat The main building houses 16 rooms, and under construction at the moment and due to open on 1 April is a wing with 14 luxury rooms. “The new rooms will all have their own terrace with beautiful views of the sea and the sun rising over Gudhjem, and will include all facilities to make the stay special,” says Søgård. Guests at Stammershalle are in for a culinary treat, too. The restaurant serves a

The 2022 season at Stammershalle Badehotel starts on 1 April, and the hotel will remain open until 2 January 2023. During Christmas and New Year, special all-inclusive packages will be available for those who wish to celebrate the festive season in a luxurious setting in Bornholm’s nature.