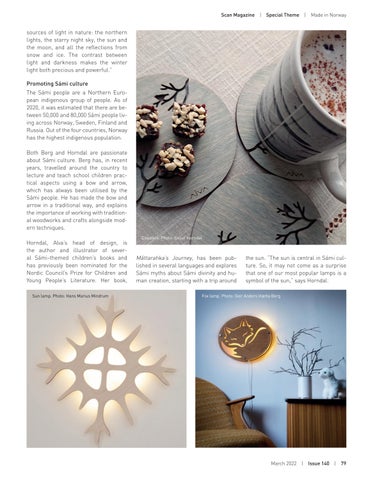 sources of light in nature: the northern lights, the starry night sky, the sun and the moon, and all the reflections from snow and ice. The contrast between light and darkness makes the winter light both precious and powerful.” Promoting Sámi culture The Sámi people are a Northern European indigenous group of people. As of 2020, it was estimated that there are between 50,000 and 80,000 Sámi people living across Norway, Sweden, Finland and Russia. Out of the four countries, Norway has the highest indigenous population. Both Berg and Horndal are passionate about Sámi culture. Berg has, in recent years, travelled around the country to lecture and teach school children practical aspects using a bow and arrow, which has always been utilised by the Sámi people. He has made the bow and arrow in a traditional way, and explains the importance of working with traditional woodworks and crafts alongside modern techniques. Horndal, Alva’s head of design, is the author and illustrator of several Sámi-themed children’s books and has previously been nominated for the Nordic Council’s Prize for Children and Young People’s Literature. Her book, Sun lamp. Photo: Hans Marius Mindrum

Máttarahka’s Journey, has been published in several languages and explores Sámi myths about Sámi divinity and human creation, starting with a trip around

the sun. “The sun is central in Sámi culture. So, it may not come as a surprise that one of our most popular lamps is a symbol of the sun,” says Horndal.