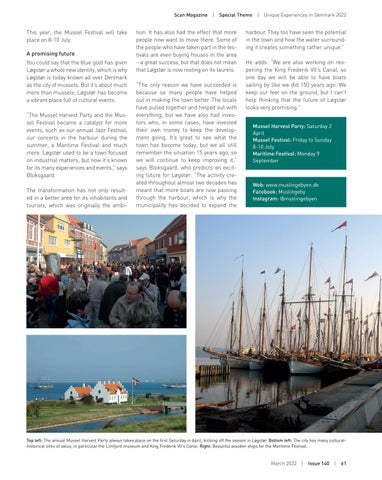 This year, the Mussel Festival will take place on 8-10 July. A promising future You could say that the blue gold has given Løgstør a whole new identity, which is why Løgstør is today known all over Denmark as the city of mussels. But it’s about much more than mussels; Løgstør has become a vibrant place full of cultural events. “The Mussel Harvest Party and the Mussel Festival became a catalyst for more events, such as our annual Jazz Festival, our concerts in the harbour during the summer, a Maritime Festival and much more. Løgstør used to be a town focused on industrial matters, but now it’s known for its many experiences and events,” says Bloksgaard. The transformation has not only resulted in a better area for its inhabitants and tourists, which was originally the ambi-

tion. It has also had the effect that more people now want to move there. Some of the people who have taken part in the festivals are even buying houses in the area – a great success, but that does not mean that Løgstør is now resting on its laurels. “The only reason we have succeeded is because so many people have helped out in making the town better. The locals have pulled together and helped out with everything, but we have also had investors who, in some cases, have invested their own money to keep the development going. It’s great to see what the town has become today, but we all still remember the situation 15 years ago, so we will continue to keep improving it,” says Bloksgaard, who predicts an exciting future for Løgstør: “The activity created throughout almost two decades has meant that more boats are now passing through the harbour, which is why the municipality has decided to expand the

harbour. They too have seen the potential in the town and how the water surrounding it creates something rather unique.” He adds: “We are also working on reopening the King Frederik VII’s Canal, so one day we will be able to have boats sailing by like we did 150 years ago. We keep our feet on the ground, but I can’t help thinking that the future of Løgstør looks very promising.” Mussel Harvest Party: Saturday 2 April Mussel Festival: Friday to Sunday 8-10 July Maritime Festival: Monday 9 September

Top left: The annual Mussel Harvest Party always takes place on the first Saturday in April, kicking off the season in Løgstør. Bottom left: The city has many culturalhistorical sites of value, in particular the Limfjord museum and King Frederik VII’s Canal. Right: Beautiful wooden ships for the Maritime Festival.