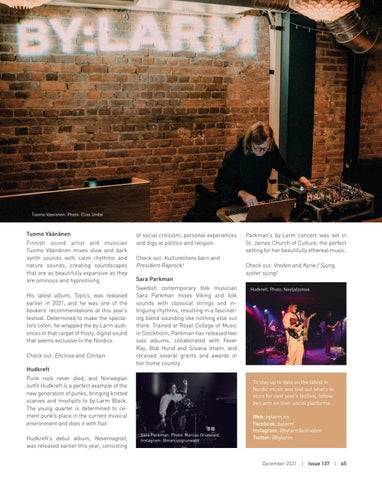 Tuomo Väänänen Finnish sound artist and musician Tuomo Väänänen mixes slow and dark synth sounds with calm rhythms and nature sounds, creating soundscapes that are as beautifully expansive as they are ominous and hypnotising. His latest album, Topics, was released earlier in 2021, and he was one of the bookers’ recommendations at this year’s festival. Determined to make the spectators listen, he wrapped the by:Larm audiences in that carpet of frosty, digital sound that seems exclusive to the Nordics. Check out: Enclose and Contain Hudkreft

of social criticism, personal experiences and digs at politics and religion. Check out: Kulturelitens barn and President Raprock! Sara Parkman Swedish contemporary folk musician Sara Parkman mixes Viking and folk sounds with classical strings and intriguing rhythms, resulting in a fascinating blend sounding like nothing else out there. Trained at Royal College of Music in Stockholm, Parkman has released two solo albums, collaborated with Fever Ray, Bob Hund and Silvana Imam, and received several grants and awards in her home country.

Punk rock never died, and Norwegian outfit Hudkreft is a perfect example of the new generation of punks, bringing knitted scarves and moshpits to by:Larm Black. The young quartet is determined to cement punk’s place in the current musical environment and does it with flair. Hudkreft’s debut album, Nevemagnet, was released earlier this year, consisting

To stay up to date on the latest in Nordic music and find out what’s in store for next year’s festival, follow by:Larm on their social platforms: