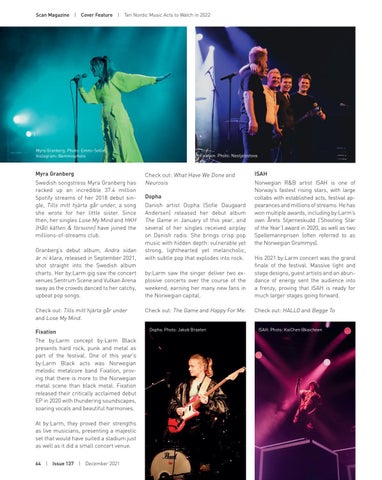 Myra Granberg Swedish songstress Myra Granberg has racked up an incredible 37.4 million Spotify streams of her 2018 debut single, Tills mitt hjärta går under, a song she wrote for her little sister. Since then, her singles Lose My Mind and HKH (Håll käften &amp; försvinn) have joined the millions-of-streams club. Granberg’s debut album, Andra sidan är ni klara, released in September 2021, shot straight into the Swedish album charts. Her by:Larm gig saw the concert venues Sentrum Scene and Vulkan Arena sway as the crowds danced to her catchy, upbeat pop songs. Check out: Tills mitt hjärta går under and Lose My Mind. Fixation The by:Larm concept by:Larm Black presents hard rock, punk and metal as part of the festival. One of this year’s by:Larm Black acts was Norwegian melodic metalcore band Fixation, proving that there is more to the Norwegian metal scene than black metal. Fixation released their critically acclaimed debut EP in 2020 with thundering soundscapes, soaring vocals and beautiful harmonies. At by:Larm, they proved their strengths as live musicians, presenting a majestic set that would have suited a stadium just as well as it did a small concert venue. 64  |  Issue 137  |  December 2021

Check out: What Have We Done and Neurosis Dopha Danish artist Dopha (Sofie Daugaard Andersen) released her debut album The Game in January of this year, and several of her singles received airplay on Danish radio. She brings crisp pop music with hidden depth: vulnerable yet strong, lighthearted yet melancholic, with subtle pop that explodes into rock.

ISAH Norwegian R&amp;B artist ISAH is one of Norway’s fastest rising stars, with large collabs with established acts, festival appearances and millions of streams. He has won multiple awards, including by:Larm’s own Årets Stjerneskudd (‘Shooting Star of the Year’) award in 2020, as well as two Spellemannprisen (often referred to as the Norwegian Grammys).

by:Larm saw the singer deliver two explosive concerts over the course of the weekend, earning her many new fans in the Norwegian capital.

His 2021 by:Larm concert was the grand finale of the festival. Massive light and stage designs, guest artists and an abundance of energy sent the audience into a frenzy, proving that ISAH is ready for much larger stages going forward.

Check out: The Game and Happy For Me.

Check out: HALLO and Begge To