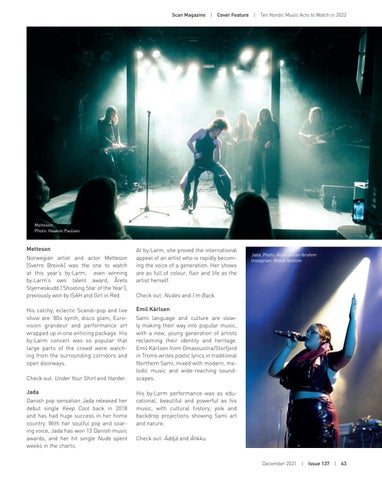 Metteson Norwegian artist and actor Metteson (Sverre Breivik) was the one to watch at this year’s by:Larm, even winning by:Larm’s own talent award, Årets Stjerneskudd (‘Shooting Star of the Year’), previously won by ISAH and Girl in Red. His catchy, eclectic Scandi-pop and live show are ‘80s synth, disco glam, Eurovision grandeur and performance art wrapped up in one enticing package. His by:Larm concert was so popular that large parts of the crowd were watching from the surrounding corridors and open doorways. Check out: Under Your Shirt and Harder. Jada Danish pop sensation Jada released her debut single Keep Cool back in 2018 and has had huge success in her home country. With her soulful pop and soaring voice, Jada has won 13 Danish music awards, and her hit single Nude spent weeks in the charts.

At by:Larm, she proved the international appeal of an artist who is rapidly becoming the voice of a generation. Her shows are as full of colour, flair and life as the artist herself.

Check out: Nudes and I’m Back. Emil Kárlsen Sami language and culture are slowly making their way into popular music, with a new, young generation of artists reclaiming their identity and heritage. Emil Kárlsen from Omasvuotna/Storfjord in Troms writes poetic lyrics in traditional Northern Sami, mixed with modern, melodic music and wide-reaching soundscapes. His by:Larm performance was as educational, beautiful and powerful as his music, with cultural history, yoik and backdrop projections showing Sami art and nature. Check out: Áddjá and Áhkku