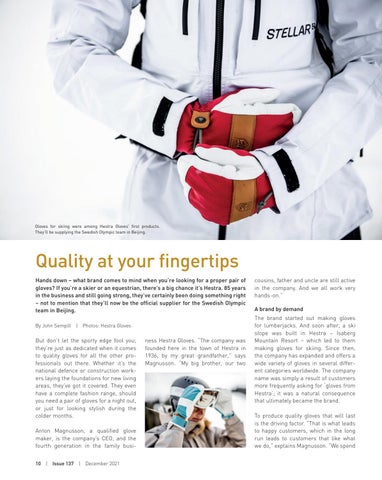 Gloves for skiing were among Hestra Gloves’ first products. They’ll be supplying the Swedish Olympic team in Beijing.

Quality at your fingertips Hands down – what brand comes to mind when you’re looking for a proper pair of gloves? If you’re a skier or an equestrian, there’s a big chance it’s Hestra. 85 years in the business and still going strong, they’ve certainly been doing something right – not to mention that they’ll now be the official supplier for the Swedish Olympic team in Beijing. By John Sempill  |  Photos: Hestra Gloves

But don’t let the sporty edge fool you; they’re just as dedicated when it comes to quality gloves for all the other professionals out there. Whether it’s the national defence or construction workers laying the foundations for new living areas, they’ve got it covered. They even have a complete fashion range, should you need a pair of gloves for a night out, or just for looking stylish during the colder months. Anton Magnusson, a qualified glove maker, is the company’s CEO, and the fourth generation in the family busi10  |  Issue 137  |  December 2021

ness Hestra Gloves. “The company was founded here in the town of Hestra in 1936, by my great grandfather,” says Magnusson. “My big brother, our two

cousins, father and uncle are still active in the company. And we all work very hands-on.” A brand by demand The brand started out making gloves for lumberjacks. And soon after, a ski slope was built in Hestra – Isaberg Mountain Resort – which led to them making gloves for skiing. Since then, the company has expanded and offers a wide variety of gloves in several different categories worldwide. The company name was simply a result of customers more frequently asking for ‘gloves from Hestra’; it was a natural consequence that ultimately became the brand. To produce quality gloves that will last is the driving factor. “That is what leads to happy customers, which in the long run leads to customers that like what we do,” explains Magnusson. “We spend