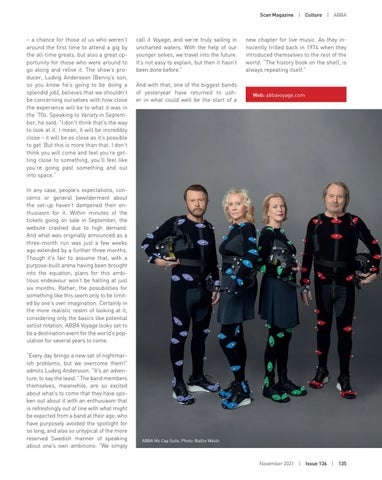 – a chance for those of us who weren’t around the first time to attend a gig by the all-time greats, but also a great opportunity for those who were around to go along and relive it. The show’s producer, Ludvig Andersson (Benny’s son, so you know he’s going to be doing a splendid job), believes that we shouldn’t be concerning ourselves with how close the experience will be to what it was in the ‘70s. Speaking to Variety in September, he said: “I don’t think that’s the way to look at it. I mean, it will be incredibly close – it will be as close as it’s possible to get. But this is more than that. I don’t think you will come and feel you’re getting close to something, you’ll feel like you’re going past something and out into space.”

call it Voyage, and we’re truly sailing in uncharted waters. With the help of our younger selves, we travel into the future. It’s not easy to explain, but then it hasn’t been done before.” And with that, one of the biggest bands of yesteryear have returned to usher in what could well be the start of a

new chapter for live music. As they innocently trilled back in 1974 when they introduced themselves to the rest of the world: “The history book on the shelf, is always repeating itself.”

In any case, people’s expectations, concerns or general bewilderment about the set-up haven’t dampened their enthusiasm for it. Within minutes of the tickets going on sale in September, the website crashed due to high demand. And what was originally announced as a three-month run was just a few weeks ago extended by a further three months. Though it’s fair to assume that, with a purpose-built arena having been brought into the equation, plans for this ambitious endeavour won’t be halting at just six months. Rather, the possibilities for something like this seem only to be limited by one’s own imagination. Certainly in the more realistic realm of looking at it, considering only the basics like potential setlist rotation, ABBA Voyage looks set to be a destination event for the world’s population for several years to come. “Every day brings a new set of nightmarish problems, but we overcome them!” admits Ludvig Andersson. “It’s an adventure, to say the least.” The band members themselves, meanwhile, are so excited about what’s to come that they have spoken out about it with an enthusiasm that is refreshingly out of line with what might be expected from a band at their age, who have purposely avoided the spotlight for so long, and also so untypical of the more reserved Swedish manner of speaking about one’s own ambitions: “We simply