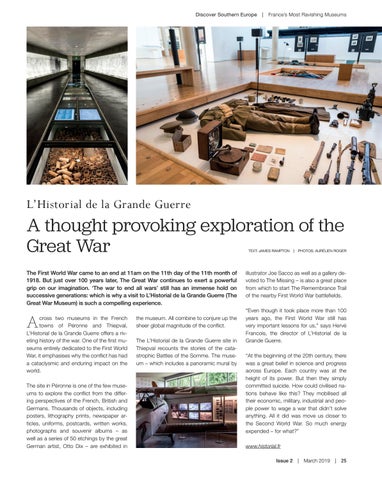 A thought provoking exploration of the Great War

The First World War came to an end at 11am on the 11th day of the 11th month of 1918. But just over 100 years later, The Great War continues to exert a powerful grip on our imagination. ‘The war to end all wars’ still has an immense hold on successive generations: which is why a visit to L’Historial de la Grande Guerre (The Great War Museum) is such a compelling experience.

cross two museums in the French towns of Péronne and Thiepval, L’Historial de la Grande Guerre offers a riveting history of the war. One of the first museums entirely dedicated to the First World War, it emphasises why the conflict has had a cataclysmic and enduring impact on the world. The site in Péronne is one of the few museums to explore the conflict from the differing perspectives of the French, British and Germans. Thousands of objects, including posters, lithography prints, newspaper articles, uniforms, postcards, written works, photographs and souvenir albums – as well as a series of 50 etchings by the great German artist, Otto Dix – are exhibited in

the museum. All combine to conjure up the sheer global magnitude of the conflict. The L’Historial de la Grande Guerre site in Thiepval recounts the stories of the catastrophic Battles of the Somme. The museum – which includes a panoramic mural by

illustrator Joe Sacco as well as a gallery devoted to The Missing – is also a great place from which to start The Remembrance Trail of the nearby First World War battlefields. “Even though it took place more than 100 years ago, the First World War still has very important lessons for us,” says Hervé Francois, the director of L’Historial de la Grande Guerre. “At the beginning of the 20th century, there was a great belief in science and progress across Europe. Each country was at the height of its power. But then they simply committed suicide. How could civilised nations behave like this? They mobilised all their economic, military, industrial and people power to wage a war that didn’t solve anything. All it did was move us closer to the Second World War. So much energy expended – for what?” www.historial.fr Issue 2  |  March 2019  |  25