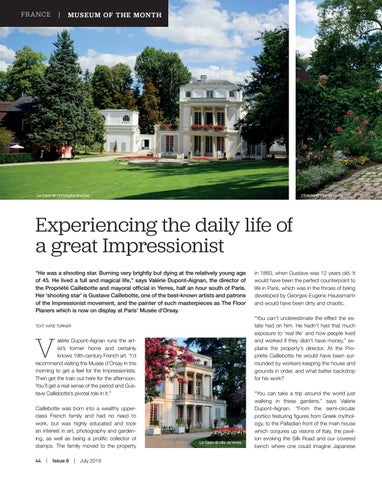 Experiencing the daily life of a great Impressionist “He was a shooting star. Burning very brightly but dying at the relatively young age of 45. He lived a full and magical life,” says Valérie Dupont-Aignan, the director of the Propriété Caillebotte and mayoral official in Yerres, half an hour south of Paris. Her ‘shooting star’ is Gustave Caillebotte, one of the best-known artists and patrons of the Impressionist movement, and the painter of such masterpieces as The Floor Planers which is now on display at Paris’ Musée d’Orsay.

“You can’t underestimate the effect the estate had on him. He hadn’t had that much exposure to ‘real life’ and how people lived and worked if they didn’t have money,” explains the property’s director. At the Propriété Caillebotte he would have been surrounded by workers keeping the house and grounds in order, and what better backdrop for his work?

alérie Dupont-Aignan runs the artist’s former home and certainly knows 19th-century French art. “I’d recommend visiting the Musée d’Orsay in the morning to get a feel for the Impressionists. Then get the train out here for the afternoon. You’ll get a real sense of the period and Gustave Caillebotte’s pivotal role in it.” Caillebotte was born into a wealthy upperclass French family and had no need to work, but was highly educated and took an interest in art, photography and gardening, as well as being a prolific collector of stamps. The family moved to the property 44  |  Issue 6  |  July 2019

in 1860, when Gustave was 12 years old. It would have been the perfect counterpoint to life in Paris, which was in the throes of being developed by Georges-Eugene Haussmann and would have been dirty and chaotic.

“You can take a trip around the world just walking in these gardens,” says Valérie Dupont-Aignan. “From the semi-circular portico featuring figures from Greek mythology, to the Palladian front of the main house which conjures up visions of Italy, the pavilion evoking the Silk Road and our covered bench where one could imagine Japanese