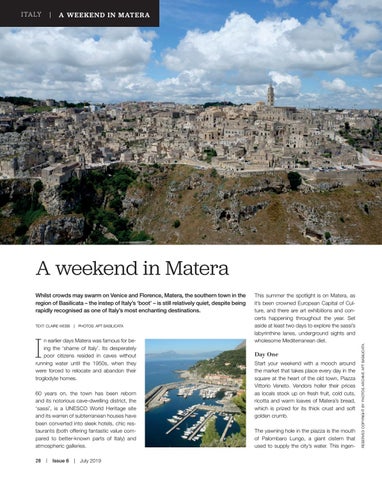 n earlier days Matera was famous for being the ‘shame of Italy’. Its desperately poor citizens resided in caves without running water until the 1950s, when they were forced to relocate and abandon their troglodyte homes. 60 years on, the town has been reborn and its notorious cave-dwelling district, the ‘sassi’, is a UNESCO World Heritage site and its warren of subterranean houses have been converted into sleek hotels, chic restaurants (both offering fantastic value compared to better-known parts of Italy) and atmospheric galleries. 28  |  Issue 6  |  July 2019

This summer the spotlight is on Matera, as it’s been crowned European Capital of Culture, and there are art exhibitions and concerts happening throughout the year. Set aside at least two days to explore the sassi’s labyrinthine lanes, underground sights and wholesome Mediterranean diet.

Day One Start your weekend with a mooch around the market that takes place every day in the square at the heart of the old town, Piazza Vittorio Veneto. Vendors holler their prices as locals stock up on fresh fruit, cold cuts, ricotta and warm loaves of Matera’s bread, which is prized for its thick crust and soft golden crumb. The yawning hole in the piazza is the mouth of Palombaro Lungo, a giant cistern that used to supply the city’s water. This ingen-

Whilst crowds may swarm on Venice and Florence, Matera, the southern town in the region of Basilicata – the instep of Italy’s ‘boot’ – is still relatively quiet, despite being rapidly recognised as one of Italy’s most enchanting destinations.