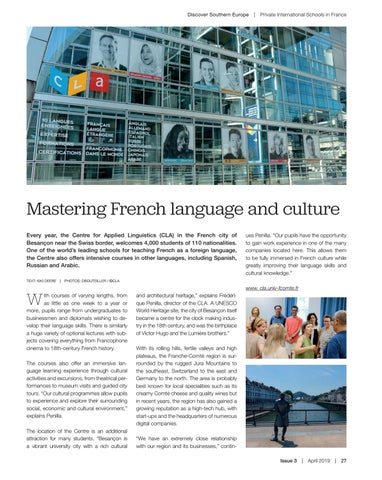 Mastering French language and culture Every year, the Centre for Applied Linguistics (CLA) in the French city of Besançon near the Swiss border, welcomes 4,000 students of 110 nationalities. One of the world’s leading schools for teaching French as a foreign language, the Centre also offers intensive courses in other languages, including Spanish, Russian and Arabic.

ues Penilla. “Our pupils have the opportunity to gain work experience in one of the many companies located here. This allows them to be fully immersed in French culture while greatly improving their language skills and cultural knowledge.”

ith courses of varying lengths, from as little as one week to a year or more, pupils range from undergraduates to businessmen and diplomats wishing to develop their language skills. There is similarly a huge variety of optional lectures with subjects covering everything from Francophone cinema to 18th-century French history. The courses also offer an immersive language learning experience through cultural activities and excursions, from theatrical performances to museum visits and guided city tours. “Our cultural programmes allow pupils to experience and explore their surrounding social, economic and cultural environment,” explains Penilla. The location of the Centre is an additional attraction for many students. “Besançon is a vibrant university city with a rich cultural

www. cla.univ-fcomte.fr and architectural heritage,” explains Frédérique Penilla, director of the CLA. A UNESCO World Heritage site, the city of Besançon itself became a centre for the clock making industry in the 18th century, and was the birthplace of Victor Hugo and the Lumière brothers.” With its rolling hills, fertile valleys and high plateaus, the Franche-Comté region is surrounded by the rugged Jura Mountains to the southeast, Switzerland to the east and Germany to the north. The area is probably best known for local specialities such as its creamy Comté cheese and quality wines but in recent years, the region has also gained a growing reputation as a high-tech hub, with start-ups and the headquarters of numerous digital companies. “We have an extremely close relationship with our region and its businesses,” continIssue 3  |  April 2019  |  27