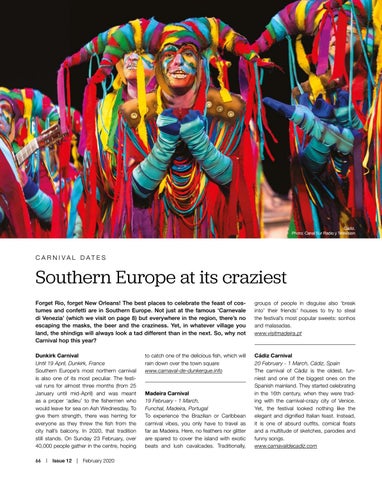 Southern Europe at its craziest Forget Rio, forget New Orleans! The best places to celebrate the feast of costumes and confetti are in Southern Europe. Not just at the famous ‘Carnevale di Venezia’ (which we visit on page 8) but everywhere in the region, there’s no escaping the masks, the beer and the craziness. Yet, in whatever village you land, the shindigs will always look a tad different than in the next. So, why not Carnival hop this year?

groups of people in disguise also ‘break into’ their friends’ houses to try to steal the festival’s most popular sweets: sonhos and malasadas. www.visitmadeira.pt

Dunkirk Carnival Until 19 April, Dunkirk, France Southern Europe’s most northern carnival is also one of its most peculiar. The festival runs for almost three months (from 25 January until mid-April) and was meant as a proper ‘adieu’ to the fishermen who would leave for sea on Ash Wednesday. To give them strength, there was herring for everyone as they threw the fish from the city hall’s balcony. In 2020, that tradition still stands. On Sunday 23 February, over 40,000 people gather in the centre, hoping

Cádiz Carnival 20 February - 1 March, Cádiz, Spain The carnival of Cádiz is the oldest, funniest and one of the biggest ones on the Spanish mainland. They started celebrating in the 16th century, when they were trading with the carnival-crazy city of Venice. Yet, the festival looked nothing like the elegant and dignified Italian feast. Instead, it is one of absurd outfits, comical floats and a multitude of sketches, parodies and funny songs. www.carnavaldecadiz.com

to catch one of the delicious fish, which will rain down over the town square www.carnaval-de-dunkerque.info

Madeira Carnival 19 February - 1 March, Funchal, Madeira, Portugal To experience the Brazilian or Caribbean carnival vibes, you only have to travel as far as Madeira. Here, no feathers nor glitter are spared to cover the island with exotic beats and lush cavalcades. Traditionally,

Fasten your seatbelts, because we are off and away. In our February issue, we present to you the prestigious Ultimate Travel Top 50, Souther...

Fasten your seatbelts, because we are off and away. In our February issue, we present to you the prestigious Ultimate Travel Top 50, Souther...