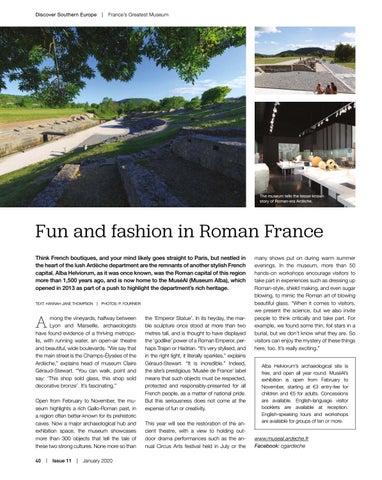 The museum tells the lesser-known story of Roman-era Ardèche.

Fun and fashion in Roman France Think French boutiques, and your mind likely goes straight to Paris, but nestled in the heart of the lush Ardèche department are the remnants of another stylish French capital. Alba Helviorum, as it was once known, was the Roman capital of this region more than 1,500 years ago, and is now home to the MuséAl (Museum Alba), which opened in 2013 as part of a push to highlight the department’s rich heritage. TEXT: HANNAH JANE THOMPSON  |  PHOTOS: P. FOURNIER

mong the vineyards, halfway between Lyon and Marseille, archaeologists have found evidence of a thriving metropolis, with running water, an open-air theatre and beautiful, wide boulevards. “We say that the main street is the Champs-Élysées of the Ardèche,” explains head of museum Claire Géraud-Stewart. “You can walk, point and say: ‘This shop sold glass, this shop sold decorative bronze’. It’s fascinating.” Open from February to November, the museum highlights a rich Gallo-Roman past, in a region often better-known for its prehistoric caves. Now a major archaeological hub and exhibition space, the museum showcases more than 300 objects that tell the tale of these two strong cultures. None more so than 40  |  Issue 11  |  January 2020

the ‘Emperor Statue’. In its heyday, the marble sculpture once stood at more than two metres tall, and is thought to have displayed the ‘godlike’ power of a Roman Emperor, perhaps Trajan or Hadrian. “It’s very stylised, and in the right light, it literally sparkles,” explains Géraud-Stewart. “It is incredible.” Indeed, the site’s prestigious ‘Musée de France’ label means that such objects must be respected, protected and responsibly-presented for all French people, as a matter of national pride. But this seriousness does not come at the expense of fun or creativity. This year will see the restoration of the ancient theatre, with a view to holding outdoor drama performances such as the annual Circus Arts festival held in July or the

many shows put on during warm summer evenings. In the museum, more than 50 hands-on workshops encourage visitors to take part in experiences such as dressing up Roman-style, shield making, and even sugar blowing, to mimic the Roman art of blowing beautiful glass. “When it comes to visitors, we present the science, but we also invite people to think critically and take part. For example, we found some thin, foil stars in a burial, but we don’t know what they are. So visitors can enjoy the mystery of these things here, too. It’s really exciting.” Alba Helviorum’s archaeological site is free, and open all year round. MuséAl’s exhibition is open from February to November, starting at €3 entry-fee for children and €5 for adults. Concessions are available. English-language visitor booklets are available at reception. English-speaking tours and workshops are available for groups of ten or more.