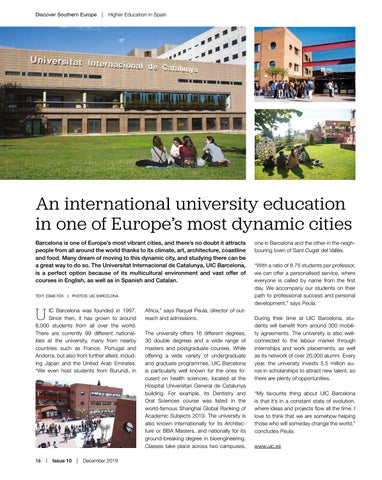 An international university education in one of Europe’s most dynamic cities Barcelona is one of Europe’s most vibrant cities, and there’s no doubt it attracts people from all around the world thanks to its climate, art, architecture, coastline and food. Many dream of moving to this dynamic city, and studying there can be a great way to do so. The Universitat Internacional de Catalunya, UIC Barcelona, is a perfect option because of its multicultural environment and vast offer of courses in English, as well as in Spanish and Catalan. TEXT: ESME FOX  |  PHOTOS: UIC BARCELONA

IC Barcelona was founded in 1997. Since then, it has grown to around 8,000 students from all over the world. There are currently 99 different nationalities at the university, many from nearby countries such as France, Portugal and Andorra, but also from further afield, including Japan and the United Arab Emirates. “We even host students from Burundi, in

Africa,” says Raquel Peula, director of outreach and admissions. The university offers 16 different degrees, 30 double degrees and a wide range of masters and postgraduate courses. While offering a wide variety of undergraduate and graduate programmes, UIC Barcelona is particularly well known for the ones focused on health sciences, located at the Hospital Universitari General de Catalunya building. For example, its Dentistry and Oral Sciences course was listed in the world-famous Shanghai Global Ranking of Academic Subjects 2019. The university is also known internationally for its Architecture or BBA Masters, and nationally for its ground-breaking degree in bioengineering. Classes take place across two campuses,

one in Barcelona and the other in the neighbouring town of Sant Cugat del Vallès. “With a ratio of 8.75 students per professor, we can offer a personalised service, where everyone is called by name from the first day. We accompany our students on their path to professional success and personal development,” says Peula. During their time at UIC Barcelona, students will benefit from around 300 mobility agreements. The university is also wellconnected to the labour market through internships and work placements, as well as its network of over 20,000 alumni. Every year, the university invests 5.5 million euros in scholarships to attract new talent, so there are plenty of opportunities. “My favourite thing about UIC Barcelona is that it’s in a constant state of evolution, where ideas and projects flow all the time. I love to think that we are somehow helping those who will someday change the world,” concludes Peula. www.uic.es

In our last issue of the year, we celebrate the winter cold while on skis and the spring sun while strolling through Las Palmas de Gran Canaria. We also head on a quest to find the region’s most colourful spots, which leads us to some fascinating, bright places. We visit our favourite chateaux, enjoy the mountain views in Grenoble and walk through the corridors of France and Spain’s greatest universities and business schools. Add some Christmas vibes and presents into the mix and you’ve got our jolly December issue.