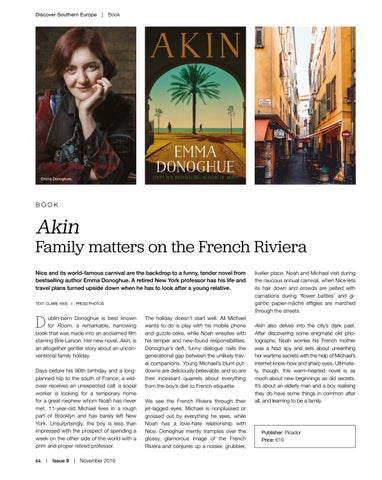 Family matters on the French Riviera Nice and its world-famous carnival are the backdrop to a funny, tender novel from bestselling author Emma Donoghue. A retired New York professor has his life and travel plans turned upside down when he has to look after a young relative. TEXT: CLAIRE WEB  I  PRESS PHOTOS

ublin-born Donoghue is best known for Room, a remarkable, harrowing book that was made into an acclaimed film starring Brie Larson. Her new novel, Akin, is an altogether gentler story about an unconventional family holiday. Days before his 90th birthday and a longplanned trip to the south of France, a widower receives an unexpected call: a social worker is looking for a temporary home for a great-nephew whom Noah has never met. 11-year-old Michael lives in a rough part of Brooklyn and has barely left New York. Unsurprisingly, the boy is less than impressed with the prospect of spending a week on the other side of the world with a prim and proper retired professor.

The holiday doesn’t start well. All Michael wants to do is play with his mobile phone and guzzle coke, while Noah wrestles with his temper and new-found responsibilities. Donoghue’s deft, funny dialogue nails the generational gap between the unlikely travel companions. Young Michael’s blunt putdowns are deliciously believable, and so are their incessant quarrels about everything from the boy’s diet to French etiquette. We see the French Riviera through their jet-lagged eyes: Michael is nonplussed or grossed out by everything he sees, while Noah has a love-hate relationship with Nice. Donoghue merrily tramples over the glossy, glamorous image of the French Riviera and conjures up a noisier, grubbier,

livelier place. Noah and Michael visit during the raucous annual carnival, when Nice lets its hair down and crowds are pelted with carnations during ‘flower battles’ and gigantic papier-mâché effigies are marched through the streets.

Akin also delves into the city’s dark past. After discovering some enigmatic old photographs, Noah worries his French mother was a Nazi spy and sets about unearthing her wartime secrets with the help of Michael’s internet know-how and sharp eyes. Ultimately, though, this warm-hearted novel is as much about new beginnings as old secrets. It’s about an elderly man and a boy realising they do have some things in common after all, and learning to be a family.