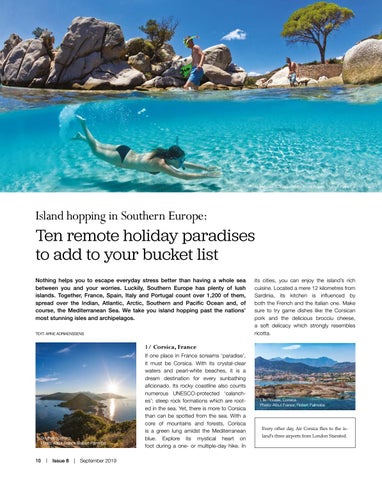 Ten remote holiday paradises to add to your bucket list Nothing helps you to escape everyday stress better than having a whole sea between you and your worries. Luckily, Southern Europe has plenty of lush islands. Together, France, Spain, Italy and Portugal count over 1,200 of them, spread over the Indian, Atlantic, Arctic, Southern and Pacific Ocean and, of course, the Mediterranean Sea. We take you island hopping past the nations’ most stunning isles and archipelagos. TEXT: ARNE ADRIAENSSENS

its cities, you can enjoy the island’s rich cuisine. Located a mere 12 kilometres from Sardinia, its kitchen is influenced by both the French and the Italian one. Make sure to try game dishes like the Corsican pork and the delicious brocciu cheese, a soft delicacy which strongly resembles ricotta.

If one place in France screams ‘paradise’, it must be Corsica. With its crystal-clear waters and pearl-white beaches, it is a dream destination for every sunbathing aficionado. Its rocky coastline also counts numerous UNESCO-protected ‘calanches’: steep rock formations which are rooted in the sea. Yet, there is more to Corsica than can be spotted from the sea. With a core of mountains and forests, Corisca is a green lung amidst the Mediterranean blue. Explore its mystical heart on foot during a one- or multiple-day hike. In

Every other day, Air Corsica flies to the island’s three airports from London Stansted.

Southern Europe is a paradise for your taste buds. Italian coffee, French beers, Roman pasta and more top-notch restaurants than your stomach can handle make it the perfect culinary destination. This month, we sample them all and present to you some of the region’s best culinary experiences. Furthermore, we head to Toulouse for a weekend and go island hopping to the region’s ten greatest paradises in the ocean. Add a couple of wonderful hotels and a handful of cultural activities into the mix, et voila: the September issue is served!