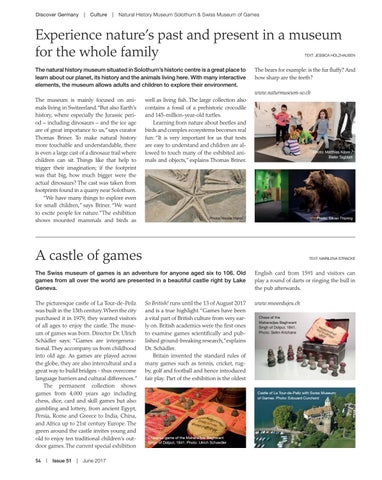 The natural history museum situated in Solothurn’s historic centre is a great place to learn about our planet, its history and the animals living here. With many interactive elements, the museum allows adults and children to explore their environment.

The bears for example: is the fur fluffy? And how sharp are the teeth? www.naturmuseum-so.ch

The museum is mainly focused on animals living in Switzerland.“But also Earth’s history, where especially the Jurassic period – including dinosaurs – and the ice age are of great importance to us,” says curator Thomas Briner. To make natural history more touchable and understandable, there is even a large cast of a dinosaur trail where children can sit. Things like that help to trigger their imagination; if the footprint was that big, how much bigger were the actual dinosaurs? The cast was taken from footprints found in a quarry near Solothurn. “We have many things to explore even for small children,” says Briner. “We want to excite people for nature.” The exhibition shows mounted mammals and birds as

well as living fish. The large collection also contains a fossil of a prehistoric crocodile and 145-million-year-old turtles. Learning from nature about beetles and birds and complex ecosystems becomes real fun: “It is very important for us that texts are easy to understand and children are allowed to touch many of the exhibited animals and objects,” explains Thomas Briner.

A castle of games

The Swiss museum of games is an adventure for anyone aged six to 106. Old games from all over the world are presented in a beautiful castle right by Lake Geneva.

English card from 1591 and visitors can play a round of darts or ringing the bull in the pub afterwards.

The picturesque castle of La Tour-de-Peilz was built in the 13th century. When the city purchased it in 1979, they wanted visitors of all ages to enjoy the castle. The museum of games was born. Director Dr. Ulrich Schädler says: “Games are intergenerational. They accompany us from childhood into old age. As games are played across the globe, they are also intercultural and a great way to build bridges - thus overcome language barriers and cultural differences.” The permanent collection shows games from 4,000 years ago including chess, dice, card and skill games but also gambling and lottery, from ancient Egypt, Persia, Rome and Greece to India, China, and Africa up to 21st century Europe. The green around the castle invites young and old to enjoy ten traditional children’s outdoor games. The current special exhibition

So British! runs until the 13 of August 2017 and is a true highlight. “Games have been a vital part of British culture from very early on. British academics were the first ones to examine games scientifically and published ground-breaking research,”explains Dr. Schädler. Britain invented the standard rules of many games such as tennis, cricket, rugby, golf and football and hence introduced fair play. Part of the exhibition is the oldest