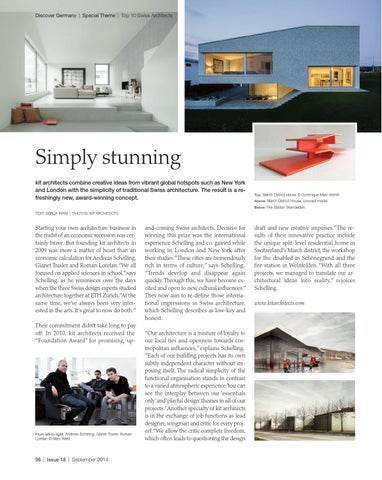 Simply stunning kit architects combine creative ideas from vibrant global hotspots such as New York and London with the simplicity of traditional Swiss architecture. The result is a refreshingly new, award-winning concept.

Starting your own architecture business in the midst of an economic recession was certainly brave. But founding kit architects in 2009 was more a matter of heart than an economic calculation for Andreas Schelling, Gianet Traxler and Roman Loretan.“We all focused on applied sciences in school,”says Schelling, as he reminisces over the days when the three Swiss design experts studied architecture together at ETH Zurich.“At the same time, we’ve always been very interested in the arts. It’s great to now do both.” Their commitment didn’t take long to pay off. In 2010, kit architects received the “Foundation Award” for promising, up-

and-coming Swiss architects. Decisive for winning this prize was the international experience Schelling and co. gained while working in London and New York after their studies.“These cities are tremendously rich in terms of culture,” says Schelling. “Trends develop and disappear again quickly. Through this, we have become excited and open to new cultural influences.” They now aim to re-define those international impressions in Swiss architecture, which Schelling describes as low-key and honest. “Our architecture is a mixture of loyalty to our local ties and openness towards cosmopolitan influences,”explains Schelling. “Each of our building projects has its own subtly independent character without imposing itself. The radical simplicity of the functional organisation stands in contrast to a varied atmospheric experience.You can see the interplay between our ‘essentials only’and‘playful design’themes in all of our projects.”Another specialty of kit architects is in the exchange of job functions as lead designer, wingman and critic for every project:“We allow the critic complete freedom, which often leads to questioning the design

draft and new creative impulses.”The results of their innovative practice include the unique split-level residential home in Switzerland’s March district, the workshop for the disabled in Schönegrund and the fire station in Weinfelden. “With all three projects, we managed to translate our architectural ideas into reality,” rejoices Schelling. www.kitarchitects.com