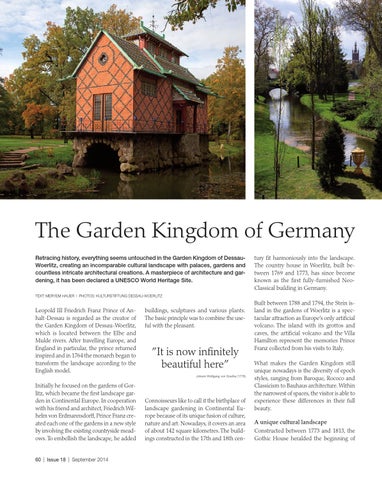 The Garden Kingdom of Germany Retracing history, everything seems untouched in the Garden Kingdom of DessauWoerlitz, creating an incomparable cultural landscape with palaces, gardens and countless intricate architectural creations. A masterpiece of architecture and gardening, it has been declared a UNESCO World Heritage Site.

tury fit harmoniously into the landscape. The country house in Woerlitz, built between 1769 and 1773, has since become known as the first fully-furnished NeoClassical building in Germany.

Leopold III Friedrich Franz Prince of Anhalt-Dessau is regarded as the creator of the Garden Kingdom of Dessau-Woerlitz, which is located between the Elbe and Mulde rivers. After travelling Europe, and England in particular, the prince returned inspired and in 1764 the monarch began to transform the landscape according to the English model.

buildings, sculptures and various plants. The basic principle was to combine the useful with the pleasant.

Initially he focused on the gardens of Gorlitz, which became the first landscape garden in Continental Europe. In cooperation with his friend and architect, Friedrich Wilhelm von Erdmannsdorff, Prince Franz created each one of the gardens in a new style by involving the existing countryside meadows. To embellish the landscape, he added

Connoisseurs like to call it the birthplace of landscape gardening in Continental Europe because of its unique fusion of culture, nature and art. Nowadays, it covers an area of about 142 square kilometres. The buildings constructed in the 17th and 18th cen-

Built between 1788 and 1794, the Stein island in the gardens of Woerlitz is a spectacular attraction as Europe’s only artificial volcano. The island with its grottos and caves, the artificial volcano and the Villa Hamilton represent the memories Prince Franz collected from his visits to Italy. What makes the Garden Kingdom still unique nowadays is the diversity of epoch styles, ranging from Baroque, Rococo and Classicism to Bauhaus architecture. Within the narrowest of spaces, the visitor is able to experience these differences in their full beauty. A unique cultural landscape Constructed between 1773 and 1813, the Gothic House heralded the beginning of