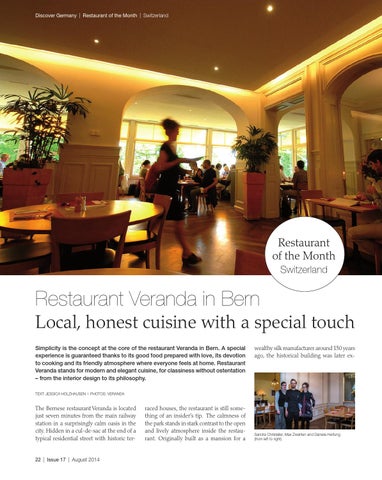 Restaurant of the Month Switzerland

Restaurant Veranda in Bern Local, honest cuisine with a special touch Simplicity is the concept at the core of the restaurant Veranda in Bern. A special experience is guaranteed thanks to its good food prepared with love, its devotion to cooking and its friendly atmosphere where everyone feels at home. Restaurant Veranda stands for modern and elegant cuisine, for classiness without ostentation â&amp;#x20AC;&amp;#x201C; from the interior design to its philosophy.

wealthy silk manufacturer around 150 years ago, the historical building was later ex-

The Bernese restaurant Veranda is located just seven minutes from the main railway station in a surprisingly calm oasis in the city. Hidden in a cul-de-sac at the end of a typical residential street with historic ter-

raced houses, the restaurant is still something of an insiderâ&amp;#x20AC;&amp;#x2122;s tip. The calmness of the park stands in stark contrast to the open and lively atmosphere inside the restaurant. Originally built as a mansion for a