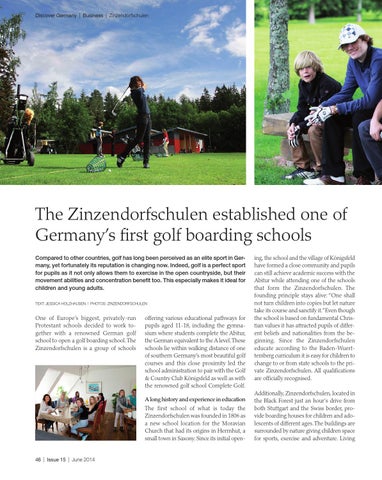 The Zinzendorfschulen established one of Germany’s first golf boarding schools Compared to other countries, golf has long been perceived as an elite sport in Germany, yet fortunately its reputation is changing now. Indeed, golf is a perfect sport for pupils as it not only allows them to exercise in the open countryside, but their movement abilities and concentration benefit too. This especially makes it ideal for children and young adults. TEXT: JESSICA HOLZHAUSEN | PHOTOS: ZINZENDORFSCHULEN

One of Europe’s biggest, privately-run Protestant schools decided to work together with a renowned German golf school to open a golf boarding school. The Zinzendorfschulen is a group of schools

offering various educational pathways for pupils aged 11-18, including the gymnasium where students complete the Abitur, the German equivalent to the A level. These schools lie within walking distance of one of southern Germany’s most beautiful golf courses and this close proximity led the school administration to pair with the Golf &amp; Country Club Königsfeld as well as with the renowned golf school Complete Golf. A long history and experience in education The first school of what is today the Zinzendorfschulen was founded in 1806 as a new school location for the Moravian Church that had its origins in Herrnhut, a small town in Saxony. Since its initial open-

ing, the school and the village of Königsfeld have formed a close community and pupils can still achieve academic success with the Abitur while attending one of the schools that form the Zinzendorfschulen. The founding principle stays alive: “One shall not turn children into copies but let nature take its course and sanctify it.”Even though the school is based on fundamental Christian values it has attracted pupils of different beliefs and nationalities from the beginning. Since the Zinzendorfschulen educate according to the Baden-Wuerttemberg curriculum it is easy for children to change to or from state schools to the private Zinzendorfschulen. All qualifications are officially recognised. Additionally, Zinzendorfschulen, located in the Black Forest just an hour&#39;s drive from both Stuttgart and the Swiss border, provide boarding houses for children and adolescents of different ages. The buildings are surrounded by nature giving children space for sports, exercise and adventure. Living