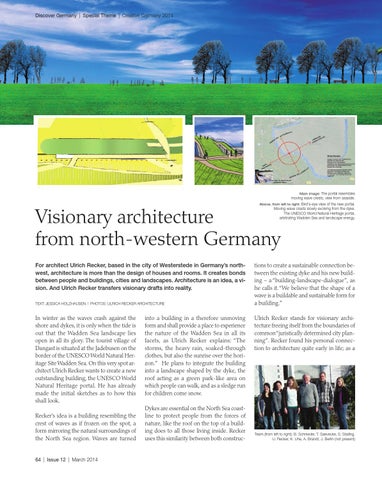 Visionary architecture from north-western Germany For architect Ulrich Recker, based in the city of Westerstede in Germany’s northwest, architecture is more than the design of houses and rooms. It creates bonds between people and buildings, cities and landscapes. Architecture is an idea, a vision. And Ulrich Recker transfers visionary drafts into reality. TEXT: JESSICA HOLZHAUSEN | PHOTOS: ULRICH RECKER ARCHITECTURE

In winter as the waves crash against the shore and dykes, it is only when the tide is out that the Wadden Sea landscape lies open in all its glory. The tourist village of Dangast is situated at the Jadebusen on the border of the UNESCO World Natural Heritage Site Wadden Sea. On this very spot architect Ulrich Recker wants to create a new outstanding building, the UNESCO World Natural Heritage portal. He has already made the initial sketches as to how this shall look. Recker’s idea is a building resembling the crest of waves as if frozen on the spot, a form mirroring the natural surroundings of the North Sea region. Waves are turned

into a building in a therefore unmoving form and shall provide a place to experience the nature of the Wadden Sea in all its facets, as Ulrich Recker explains: “The storms, the heavy rain, soaked-through clothes, but also the sunrise over the horizon.” He plans to integrate the building into a landscape shaped by the dyke, the roof acting as a green park-like area on which people can walk, and as a sledge run for children come snow. Dykes are essential on the North Sea coastline to protect people from the forces of nature, like the roof on the top of a building does to all those living inside. Recker uses this similarity between both construc-

tions to create a sustainable connection between the existing dyke and his new building – a “building-landscape-dialogue”, as he calls it. “We believe that the shape of a wave is a buildable and sustainable form for a building.” Ulrich Recker stands for visionary architecture freeing itself from the boundaries of common“juristically determined city planning”. Recker found his personal connection to architecture quite early in life; as a