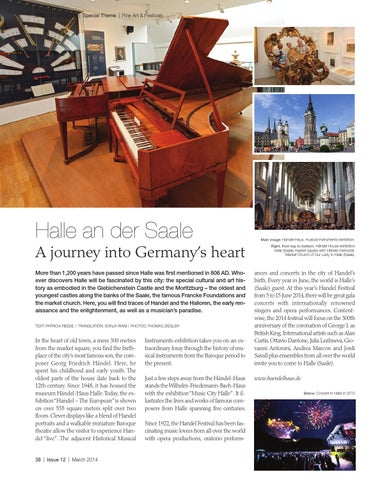 A journey into Germany’s heart

More than 1,200 years have passed since Halle was first mentioned in 806 AD. Whoever discovers Halle will be fascinated by this city: the special cultural and art history as embodied in the Giebichenstein Castle and the Moritzburg – the oldest and youngest castles along the banks of the Saale, the famous Francke Foundations and the market church. Here, you will find traces of Handel and the Halloren, the early renaissance and the enlightenment, as well as a musician’s paradise.

ances and concerts in the city of Handel’s birth. Every year in June, the world is Halle’s (Saale) guest. At this year’s Handel Festival from 5 to 15 June 2014, there will be great gala concerts with internationally renowned singers and opera performances. Contentwise, the 2014 festival will focus on the 300th anniversary of the coronation of George I. as British King. International artists such as Alan Curtis, Ottavio Dantone, Julia Lezhneva, Giovanni Antonini, Andrea Marcon and Jordi Savall plus ensembles from all over the world invite you to come to Halle (Saale).

In the heart of old town, a mere 300 metres from the market square, you find the birthplace of the city’s most famous son, the composer Georg Friedrich Händel. Here, he spent his childhood and early youth. The oldest parts of the house date back to the 12th century. Since 1948, it has housed the museum Händel-Haus Halle. Today, the exhibition “Handel – The European” is shown on over 555 square meters split over two floors. Clever displays like a blend of Handel portraits and a walkable miniature Baroque theatre allow the visitor to experience Handel “live”. The adjacent Historical Musical

Instruments exhibition takes you on an extraordinary foray through the history of musical instruments from the Baroque period to the present. Just a few steps away from the Händel-Haus stands the Wilhelm-Friedemann-Bach-Haus with the exhibition “Music City Halle”. It illustrates the lives and works of famous composers from Halle spanning five centuries. Since 1922, the Handel Festival has been fascinating music lovers from all over the world with opera productions, oratorio perform-

www.haendelhaus.de Below: Concert in Halle in 2012