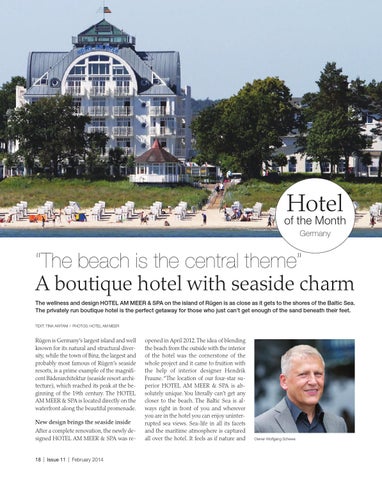 of the Month Germany

“The beach is the central theme” A boutique hotel with seaside charm The wellness and design HOTEL AM MEER &amp; SPA on the island of Rügen is as close as it gets to the shores of the Baltic Sea. The privately run boutique hotel is the perfect getaway for those who just can’t get enough of the sand beneath their feet. TEXT: TINA AWTANI | PHOTOS: HOTEL AM MEER

Rügen is Germany’s largest island and well known for its natural and structural diversity, while the town of Binz, the largest and probably most famous of Rügen’s seaside resorts, is a prime example of the magnificent Bäderarchitektur (seaside resort architecture), which reached its peak at the beginning of the 19th century. The HOTEL AM MEER &amp; SPA is located directly on the waterfront along the beautiful promenade. New design brings the seaside inside After a complete renovation, the newly designed HOTEL AM MEER &amp; SPA was re-

opened in April 2012. The idea of blending the beach from the outside with the interior of the hotel was the cornerstone of the whole project and it came to fruition with the help of interior designer Hendrik Fraune. “The location of our four-star superior HOTEL AM MEER &amp; SPA is absolutely unique. You literally can’t get any closer to the beach. The Baltic Sea is always right in front of you and wherever you are in the hotel you can enjoy uninterrupted sea views. Sea-life in all its facets and the maritime atmosphere is captured all over the hotel. It feels as if nature and