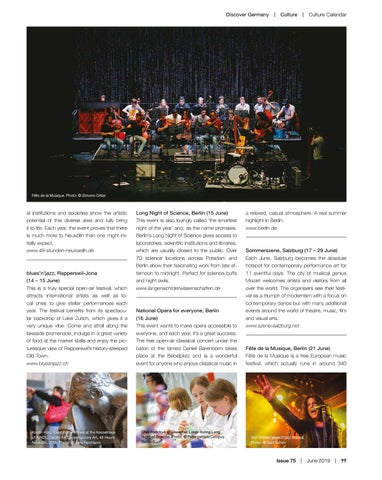 al institutions and societies show the artistic potential of this diverse area and fully bring it to life. Each year, the event proves that there is much more to Neukölln than one might initially expect. www.48-stunden-neukoelln.de

blues’n’jazz, Rapperswil-Jona (14 – 15 June) This is a truly special open-air festival, which attracts international artists as well as local ones to give stellar performances each year. The festival benefits from its spectacular backdrop of Lake Zurich, which gives it a very unique vibe. Come and stroll along the lakeside promenade, indulge in a great variety of food at the market stalls and enjoy the picturesque view of Rapperswil’s history-steeped Old Town. www.bluesnjazz.ch

Long Night of Science, Berlin (15 June) This event is also lovingly called ‘the smartest night of the year’ and, as the name promises. Berlin’s Long Night of Science gives access to laboratories, scientific institutions and libraries, which are usually closed to the public. Over 70 science locations across Potsdam and Berlin show their fascinating work from late afternoon to midnight. Perfect for science buffs and night owls. www.langenachtderwissenschaften.de

National Opera for everyone, Berlin (16 June) This event wants to make opera accessible to everyone, and each year, it’s a great success. The free open-air classical concert under the baton of the famed Daniel Barenboim takes place at the Bebelplatz and is a wonderful event for anyone who enjoys classical music in

Sommerszene, Salzburg (17 – 29 June) Each June, Salzburg becomes the absolute hotspot for contemporary performance art for 11 eventful days. The city of musical genius Mozart welcomes artists and visitors from all over the world. The organisers see their festival as a triumph of modernism with a focus on contemporary dance but with many additional events around the world of theatre, music, film and visual arts. www.szene-salzburg.net