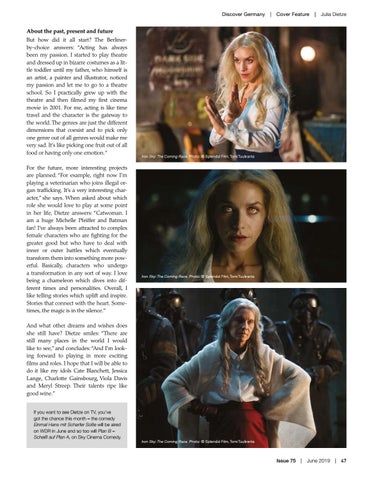 About the past, present and future But how did it all start? The Berlinerby-choice answers: “Acting has always been my passion. I started to play theatre and dressed up in bizarre costumes as a little toddler until my father, who himself is an artist, a painter and illustrator, noticed my passion and let me to go to a theatre school. So I practically grew up with the theatre and then filmed my first cinema movie in 2001. For me, acting is like time travel and the character is the gateway to the world. The genres are just the different dimensions that coexist and to pick only one genre out of all genres would make me very sad. It’s like picking one fruit out of all food or having only one emotion.“ For the future, more interesting projects are planned. “For example, right now I’m playing a veterinarian who joins illegal organ trafficking. It’s a very interesting character,” she says. When asked about which role she would love to play at some point in her life, Dietze answers: “Catwoman. I am a huge Michelle Pfeiffer and Batman fan! I’ve always been attracted to complex female characters who are fighting for the greater good but who have to deal with inner or outer battles which eventually transform them into something more powerful. Basically, characters who undergo a transformation in any sort of way. I love being a chameleon which dives into different times and personalities. Overall, I like telling stories which uplift and inspire. Stories that connect with the heart. Sometimes, the magic is in the silence.“

And what other dreams and wishes does she still have? Dietze smiles: “There are still many places in the world I would like to see,” and concludes: “And I’m looking forward to playing in more exciting films and roles. I hope that I will be able to do it like my idols Cate Blanchett, Jessica Lange, Charlotte Gainsbourg, Viola Davis and Meryl Streep. Their talents ripe like good wine.” If you want to see Dietze on TV, you’ve got the chance this month – the comedy Einmal Hans mit Scharfer Soße will be aired on WDR in June and so too will Plan B – Scheiß auf Plan A, on Sky Cinema Comedy.