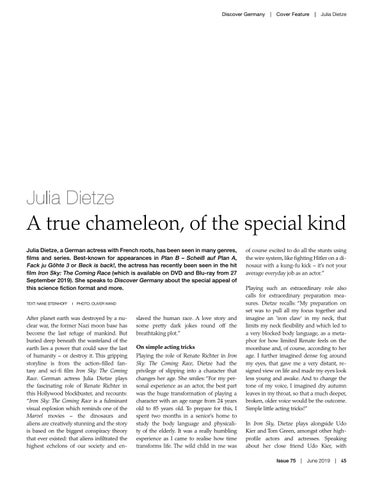 A true chameleon, of the special kind Julia Dietze, a German actress with French roots, has been seen in many genres, films and series. Best-known for appearances in Plan B – Scheiß auf Plan A, Fack ju Göhte 3 or Beck is back!, the actress has recently been seen in the hit film Iron Sky: The Coming Race (which is available on DVD and Blu-ray from 27 September 2019). She speaks to Discover Germany about the special appeal of this science fiction format and more. TEXT: NANE STEINHOFF   I  PHOTO: OLIVER WAND

After planet earth was destroyed by a nuclear war, the former Nazi moon base has become the last refuge of mankind. But buried deep beneath the wasteland of the earth lies a power that could save the last of humanity – or destroy it. This gripping storyline is from the action-filled fantasy and sci-fi film Iron Sky: The Coming Race. German actress Julia Dietze plays the fascinating role of Renate Richter in this Hollywood blockbuster, and recounts: “Iron Sky: The Coming Race is a fulminant visual explosion which reminds one of the Marvel movies – the dinosaurs and aliens are creatively stunning and the story is based on the biggest conspiracy theory that ever existed: that aliens infiltrated the highest echelons of our society and en-

slaved the human race. A love story and some pretty dark jokes round off the breathtaking plot.” On simple acting tricks Playing the role of Renate Richter in Iron Sky: The Coming Race, Dietze had the privilege of slipping into a character that changes her age. She smiles: “For my personal experience as an actor, the best part was the huge transformation of playing a character with an age range from 24 years old to 85 years old. To prepare for this, I spent two months in a senior’s home to study the body language and physicality of the elderly. It was a really humbling experience as I came to realise how time transforms life. The wild child in me was

of course excited to do all the stunts using the wire system, like fighting Hitler on a dinosaur with a kung-fu kick – it’s not your average everyday job as an actor.” Playing such an extraordinary role also calls for extraordinary preparation measures. Dietze recalls: “My preparation on set was to pull all my focus together and imagine an ’iron claw‘ in my neck, that limits my neck flexibility and which led to a very blocked body language, as a metaphor for how limited Renate feels on the moonbase and, of course, according to her age. I further imagined dense fog around my eyes, that gave me a very distant, resigned view on life and made my eyes look less young and awake. And to change the tone of my voice, I imagined dry autumn leaves in my throat, so that a much deeper, broken, older voice would be the outcome. Simple little acting tricks!” In Iron Sky, Dietze plays alongside Udo Kier and Tom Green, amongst other highprofile actors and actresses. Speaking about her close friend Udo Kier, with Issue 75  |  June 2019  |  45