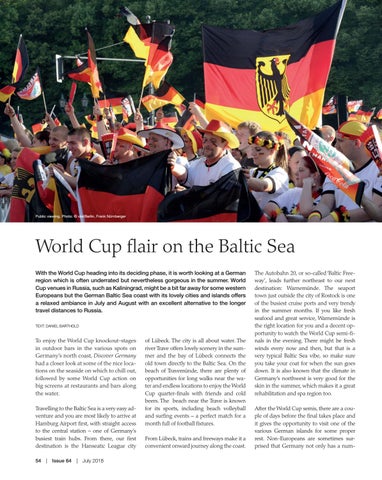 World Cup flair on the Baltic Sea With the World Cup heading into its deciding phase, it is worth looking at a German region which is often underrated but nevertheless gorgeous in the summer. World Cup venues in Russia, such as Kaliningrad, might be a bit far away for some western Europeans but the German Baltic Sea coast with its lovely cities and islands offers a relaxed ambiance in July and August with an excellent alternative to the longer travel distances to Russia. TEXT: DANIEL BARTHOLD

To enjoy the World Cup knockout-stages in outdoor bars in the various spots on Germany’s north coast, Discover Germany had a closer look at some of the nice locations on the seaside on which to chill out, followed by some World Cup action on big screens at restaurants and bars along the water. Travelling to the Baltic Sea is a very easy adventure and you are most likely to arrive at Hamburg Airport first, with straight access to the central station – one of Germany’s busiest train hubs. From there, our first destination is the Hanseatic League city 54  |  Issue 64  |  July 2018

of Lübeck. The city is all about water. The river Trave offers lovely scenery in the summer and the bay of Lübeck connects the old town directly to the Baltic Sea. On the beach of Travemünde, there are plenty of opportunities for long walks near the water and endless locations to enjoy the World Cup quarter-finals with friends and cold beers. The beach near the Trave is known for its sports, including beach volleyball and surfing events – a perfect match for a month full of football fixtures. From Lübeck, trains and freeways make it a convenient onward journey along the coast.

The Autobahn 20, or so-called ‘Baltic Freeway’, leads further northeast to our next destination: Warnemünde. The seaport town just outside the city of Rostock is one of the busiest cruise ports and very trendy in the summer months. If you like fresh seafood and great service, Warnemünde is the right location for you and a decent opportunity to watch the World Cup semi-finals in the evening. There might be fresh winds every now and then, but that is a very typical Baltic Sea vibe, so make sure you take your coat for when the sun goes down. It is also known that the climate in Germany’s northwest is very good for the skin in the summer, which makes it a great rehabilitation and spa region too. After the World Cup semis, there are a couple of days before the final takes place and it gives the opportunity to visit one of the various German islands for some proper rest. Non-Europeans are sometimes surprised that Germany not only has a num-