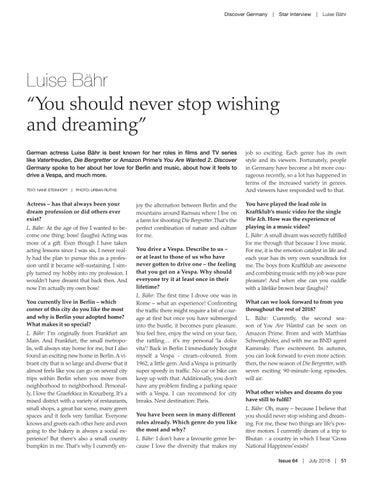 Luise Bähr “You should never stop wishing and dreaming” German actress Luise Bähr is best known for her roles in films and TV series like Vaterfreuden, Die Bergretter or Amazon Prime’s You Are Wanted 2. Discover Germany spoke to her about her love for Berlin and music, about how it feels to drive a Vespa, and much more. TEXT: NANE STEINHOFF  |  PHOTO: URBAN RUTHS

Actress – has that always been your dream profession or did others ever exist? L. Bähr: At the age of five I wanted to become one thing: boss! (laughs) Acting was more of a gift. Even though I have taken acting lessons since I was six, I never really had the plan to pursue this as a profession until it became self-sustaining. I simply turned my hobby into my profession. I wouldn’t have dreamt that back then. And now I’m actually my own boss! You currently live in Berlin – which corner of this city do you like the most and why is Berlin your adopted home? What makes it so special? L. Bähr: I’m originally from Frankfurt am Main. And Frankfurt, the small metropolis, will always stay home for me, but I also found an exciting new home in Berlin. A vibrant city that is so large and diverse that it almost feels like you can go on several city trips within Berlin when you move from neighborhood to neighborhood. Personally, I love the Graefekiez in Kreuzberg. It’s a mixed district with a variety of restaurants, small shops, a great bar scene, many green spaces and it feels very familiar. Everyone knows and greets each other here and even going to the bakery is always a social experience! But there’s also a small country bumpkin in me. That’s why I currently en-

joy the alternation between Berlin and the mountains around Ramsau where I live on a farm for shooting Die Bergretter. That’s the perfect combination of nature and culture for me. You drive a Vespa. Describe to us – or at least to those of us who have never gotten to drive one – the feeling that you get on a Vespa. Why should everyone try it at least once in their lifetime? L. Bähr: The first time I drove one was in Rome – what an experience! Confronting the traffic there might require a bit of courage at first but once you have submerged into the bustle, it becomes pure pleasure. You feel free, enjoy the wind on your face, the rattling… it’s my personal ‘la dolce vita’! Back in Berlin I immediately bought myself a Vespa - cream-coloured, from 1962, a little gem. And a Vespa is primarily super speedy in traffic. No car or bike can keep up with that. Additionally, you don’t have any problem finding a parking space with a Vespa. I can recommend for city breaks. Next destination: Paris. You have been seen in many different roles already. Which genre do you like the most and why? L. Bähr: I don’t have a favourite genre because I love the diversity that makes my

job so exciting. Each genre has its own style and its viewers. Fortunately, people in Germany have become a bit more courageous recently, so a lot has happened in terms of the increased variety in genres. And viewers have responded well to that. You have played the lead role in Kraftklub’s music video for the single Wie Ich. How was the experience of playing in a music video? L. Bähr: A small dream was secretly fulfilled for me through that because I love music. For me, it is the emotion catalyst in life and each year has its very own soundtrack for me. The boys from Kraftklub are awesome and combining music with my job was pure pleasure! And when else can you cuddle with a lifelike brown bear (laughs)? What can we look forward to from you throughout the rest of 2018? L. Bähr: Currently, the second season of You Are Wanted can be seen on Amazon Prime. From and with Matthias Schweighöfer, and with me as BND agent Kaminsky. Pure excitement. In autumn, you can look forward to even more action: then, the new season of Die Bergretter, with seven exciting 90-minute-long episodes, will air. What other wishes and dreams do you have still to fulfil? L. Bähr: Oh, many – because I believe that you should never stop wishing and dreaming. For me, these two things are life’s positive motors. I currently dream of a trip to Bhutan - a country in which I hear ‘Gross National Happiness’ exists! Issue 64  |  July 2018  |  51