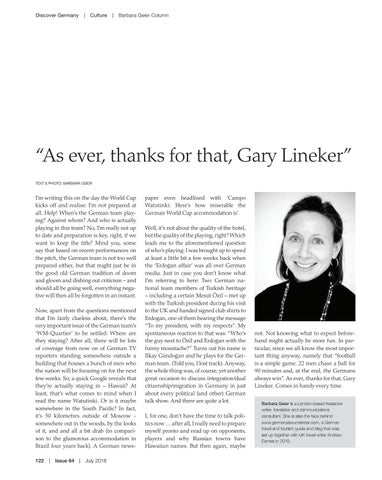 “As ever, thanks for that, Gary Lineker” TEXT &amp; PHOTO: BARBARA GEIER

I’m writing this on the day the World Cup kicks off and realise: I’m not prepared at all. Help! When’s the German team playing? Against whom? And who is actually playing in this team? No, I’m really not up to date and preparation is key, right, if we want to keep the title? Mind you, some say that based on recent performances on the pitch, the German team is not too well prepared either, but that might just be in the good old German tradition of doom and gloom and dishing out criticism – and should all be going well, everything negative will then all be forgotten in an instant. Now, apart from the questions mentioned that I’m fairly clueless about, there’s the very important issue of the German team’s ‘WM-Quartier’ to be settled: Where are they staying? After all, there will be lots of coverage from now on of German TV reporters standing somewhere outside a building that houses a bunch of men who the nation will be focusing on for the next few weeks. So, a quick Google reveals that they’re actually staying in – Hawaii? At least, that’s what comes to mind when I read the name Watutinki. Or is it maybe somewhere in the South Pacific? In fact, it’s 50 kilometres outside of Moscow somewhere out in the woods, by the looks of it, and and all a bit drab (in comparison to the glamorous accommodation in Brazil four years back). A German news122  |  Issue 64  |  July 2018

paper even headlined with ‘Campo Watutinki: Here’s how miserable the German World Cup accommodation is’. Well, it’s not about the quality of the hotel, but the quality of the playing, right? Which leads me to the aforementioned question of who’s playing: I was brought up to speed at least a little bit a few weeks back when the ‘Erdogan affair’ was all over German media. Just in case you don’t know what I’m referring to here: Two German national team members of Turkish heritage – including a certain Mesut Özil – met up with the Turkish president during his visit to the UK and handed signed club shirts to Erdogan, one of them bearing the message “To my president, with my respects”. My spontaneous reaction to that was: “Who’s the guy next to Özil and Erdogan with the funny moustache?” Turns out his name is Ilkay Gündogan and he plays for the German team. (Told you, I lost track). Anyway, the whole thing was, of course, yet another great occasion to discuss integration/dual citizenship/migration in Germany in just about every political (and other) German talk show. And there are quite a lot. I, for one, don’t have the time to talk politics now … after all, I really need to prepare myself pronto and read up on opponents, players and why Russian towns have Hawaiian names. But then again, maybe

not. Not knowing what to expect beforehand might actually be more fun. In particular, since we all know the most important thing anyway, namely that “football is a simple game: 22 men chase a ball for 90 minutes and, at the end, the Germans always win”. As ever, thanks for that, Gary Lineker. Comes in handy every time. Barbara Geier is a London-based freelance writer, translator and communications consultant. She is also the face behind www.germanyiswunderbar.com, a German travel and tourism guide and blog that was set up together with UK travel writer Andrew Eames in 2010.