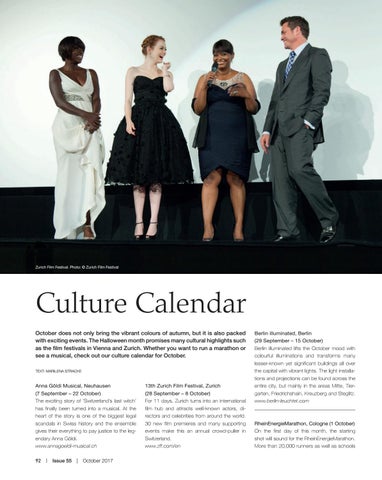 Culture Calendar October does not only bring the vibrant colours of autumn, but it is also packed with exciting events. The Halloween month promises many cultural highlights such as the film festivals in Vienna and Zurich. Whether you want to run a marathon or see a musical, check out our culture calendar for October. TEXT: MARILENA STRACKE

Anna Göldi Musical, Neuhausen (7 September – 22 October) The exciting story of ‘Switzerland’s last witch’ has finally been turned into a musical. At the heart of the story is one of the biggest legal scandals in Swiss history and the ensemble gives their everything to pay justice to the legendary Anna Göldi. www.annagoeldi-musical.ch 92  |  Issue 55  |  October 2017

13th Zurich Film Festival, Zurich (28 September – 8 October) For 11 days, Zurich turns into an international film hub and attracts well-known actors, directors and celebrities from around the world. 30 new film premieres and many supporting events make this an annual crowd-puller in Switzerland. www.zff.com/en

Berlin illuminated, Berlin (29 September – 15 October) Berlin illuminated lifts the October mood with colourful illuminations and transforms many lesser-known yet significant buildings all over the capital with vibrant lights. The light installations and projections can be found across the entire city, but mainly in the areas Mitte, Tiergarten, Friedrichshain, Kreuzberg and Steglitz. www.berlin-leuchtet.com