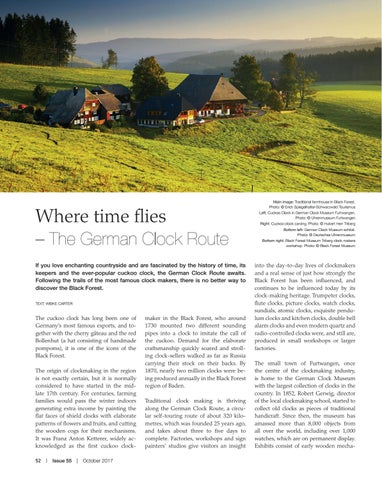 – The German Clock Route If you love enchanting countryside and are fascinated by the history of time, its keepers and the ever-popular cuckoo clock, the German Clock Route awaits. Following the trails of the most famous clock makers, there is no better way to discover the Black Forest. TEXT: WIBKE CARTER

The cuckoo clock has long been one of Germany’s most famous exports, and together with the cherry gâteau and the red Bollenhut (a hat consisting of handmade pompoms), it is one of the icons of the Black Forest. The origin of clockmaking in the region is not exactly certain, but it is normally considered to have started in the midlate 17th century. For centuries, farming families would pass the winter indoors generating extra income by painting the flat faces of shield clocks with elaborate patterns of flowers and fruits, and cutting the wooden cogs for their mechanisms. It was Franz Anton Ketterer, widely acknowledged as the first cuckoo clock52  |  Issue 55  |  October 2017

maker in the Black Forest, who around 1730 mounted two different sounding pipes into a clock to imitate the call of the cuckoo. Demand for the elaborate craftsmanship quickly soared and strolling clock-sellers walked as far as Russia carrying their stock on their backs. By 1870, nearly two million clocks were being produced annually in the Black Forest region of Baden. Traditional clock making is thriving along the German Clock Route, a circular self-touring route of about 320 kilometres, which was founded 25 years ago, and takes about three to five days to complete. Factories, workshops and sign painters&#39; studios give visitors an insight

into the day-to-day lives of clockmakers and a real sense of just how strongly the Black Forest has been influenced, and continues to be influenced today by its clock-making heritage. Trumpeter clocks, flute clocks, picture clocks, watch clocks, sundials, atomic clocks, exquisite pendulum clocks and kitchen clocks, double bell alarm clocks and even modern quartz and radio-controlled clocks were, and still are, produced in small workshops or larger factories. The small town of Furtwangen, once the centre of the clockmaking industry, is home to the German Clock Museum with the largest collection of clocks in the country. In 1852, Robert Gerwig, director of the local clockmaking school, started to collect old clocks as pieces of traditional handicraft. Since then, the museum has amassed more than 8,000 objects from all over the world, including over 1,000 watches, which are on permanent display. Exhibits consist of early wooden mecha-