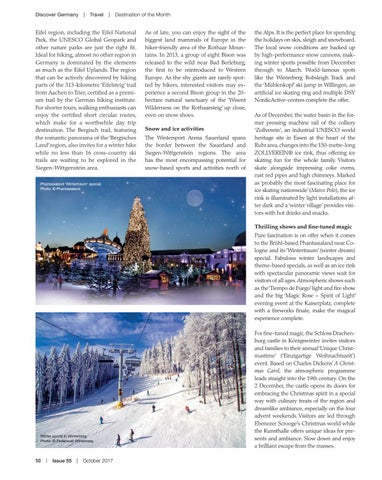 Eifel region, including the Eifel National Park, the UNESCO Global Geopark and other nature parks are just the right fit. Ideal for hiking, almost no other region in Germany is dominated by the elements as much as the Eifel Uplands. The region that can be actively discovered by hiking parts of the 313-kilometre ‘Eifelsteig’ trail from Aachen to Trier, certified as a premium trail by the German hiking institute. For shorter tours, walking enthusiasts can enjoy the certified short circular routes, which make for a worthwhile day trip destination. The Bergisch trail, featuring the romantic panorama of the ‘Bergisches Land’ region, also invites for a winter hike while no less than 16 cross-country ski trails are waiting to be explored in the Siegen-Wittgenstein area. Phantasialand ‘Wintertraum‘ special. Photo: © Phantasialand

As of late, you can enjoy the sight of the biggest land mammals of Europe in the hiker-friendly area of the Rothaar Mountains. In 2013, a group of eight Bison was released to the wild near Bad Berleburg, the first to be reintroduced to Western Europe. As the shy giants are rarely spotted by hikers, interested visitors may experience a second Bison group in the 20hectare natural sanctuary of the ‘Wisent Wilderness on the Rothaarsteig’ up close, even on snow shoes. Snow and ice activities The Wintersport Arena Sauerland spans the border between the Sauerland and Siegen-Wittgenstein regions. The area has the most encompassing potential for snow-based sports and activities north of

the Alps. It is the perfect place for spending the holidays on skis, sleigh and snowboard. The local snow conditions are backed up by high-performance snow cannons, making winter sports possible from December through to March. World-famous spots like the Winterberg Bobsleigh Track and the ‘Mühlenkopf’ ski jump in Willingen, an artificial ice skating ring and multiple DSV NordicActive-centres complete the offer. As of December, the water basin in the former pressing machine rail of the colliery ‘Zollverein’, an industrial UNESCO world heritage site in Essen at the heart of the Ruhr area, changes into the 150-metre-long ZOLLVEREIN® ice rink, thus offering ice skating fun for the whole family. Visitors skate alongside impressing coke ovens, rust red pipes and high chimneys. Marked as ‘probably the most fascinating place for ice skating nationwide’ (Marco Polo), the ice rink is illuminated by light installations after dark and a ‘winter village’ provides visitors with hot drinks and snacks. Thrilling shows and fine-tuned magic Pure fascination is on offer when it comes to the Brühl-based Phantasialand near Cologne and its ‘Wintertraum’ (winter dream) special. Fabulous winter landscapes and theme-based specials, as well as an ice rink with spectacular panoramic views wait for visitors of all ages. Atmospheric shows such as the ‘Tiempo de Fuego’ light and fire show and the big ‘Magic Rose – Spirit of Light’ evening event at the Kaiserplatz, complete with a fireworks finale, make the magical experience complete.

For fine-tuned magic, the Schloss Drachenburg castle in Königswinter invites visitors and families to their annual ‘Unique Christmastime’ (‘Einzigartige Weihnachtszeit’) event. Based on Charles Dickens’ A Christmas Carol, the atmospheric programme leads straight into the 19th century. On the 2 December, the castle opens its doors for embracing the Christmas spirit in a special way with culinary treats of the region and dreamlike ambiance, especially on the four advent weekends. Visitors are led through Ebenezer Scrooge’s Christmas world while the Kunsthalle offers unique ideas for presents and ambiance. Slow down and enjoy a brilliant escape from the masses.