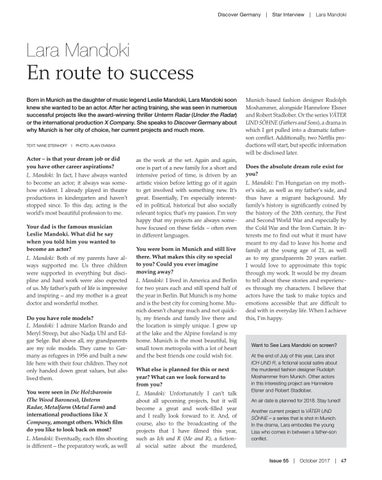 En route to success Born in Munich as the daughter of music legend Leslie Mandoki, Lara Mandoki soon knew she wanted to be an actor. After her acting training, she was seen in numerous successful projects like the award-winning thriller Unterm Radar (Under the Radar) or the international production X Company. She speaks to Discover Germany about why Munich is her city of choice, her current projects and much more. TEXT: NANE STEINHOFF  I  PHOTO: ALAN OVASKA

Actor – is that your dream job or did you have other career aspirations? L. Mandoki: In fact, I have always wanted to become an actor; it always was somehow evident. I already played in theatre productions in kindergarten and haven’t stopped since. To this day, acting is the world’s most beautiful profession to me. Your dad is the famous musician Leslie Mandoki. What did he say when you told him you wanted to become an actor? L. Mandoki: Both of my parents have always supported me. Us three children were supported in everything but discipline and hard work were also expected of us. My father’s path of life is impressive and inspiring – and my mother is a great doctor and wonderful mother. Do you have role models? L. Mandoki: I admire Marlon Brando and Meryl Streep, but also Nadja Uhl and Edgar Selge. But above all, my grandparents are my role models. They came to Germany as refugees in 1956 and built a new life here with their four children. They not only handed down great values, but also lived them. You were seen in Die Holzbaronin (The Wood Baroness), Unterm Radar, Metalfarm (Metal Farm) and international productions like X Company, amongst others. Which film do you like to look back on most? L. Mandoki: Eventually, each film shooting is different – the preparatory work, as well

as the work at the set. Again and again, one is part of a new family for a short and intensive period of time, is driven by an artistic vision before letting go of it again to get involved with something new. It’s great. Essentially, I’m especially interested in political, historical but also socially relevant topics; that’s my passion. I’m very happy that my projects are always somehow focused on these fields – often even in different languages. You were born in Munich and still live there. What makes this city so special to you? Could you ever imagine moving away? L. Mandoki: I lived in America and Berlin for two years each and still spend half of the year in Berlin. But Munich is my home and is the best city for coming home. Munich doesn’t change much and not quickly, my friends and family live there and the location is simply unique. I grew up at the lake and the Alpine foreland is my home. Munich is the most beautiful, big small town metropolis with a lot of heart and the best friends one could wish for. What else is planned for this or next year? What can we look forward to from you? L. Mandoki: Unfortunately I can’t talk about all upcoming projects, but it will become a great and work-filled year and I really look forward to it. And, of course, also to the broadcasting of the projects that I have filmed this year, such as Ich und R (Me and R), a fictional social satire about the murdered,

Munich-based fashion designer Rudolph Moshammer, alongside Hannelore Elsner and Robert Stadlober. Or the series VÄTER UND SÖHNE (Fathers and Sons), a drama in which I get pulled into a dramatic fatherson conflict. Additionally, two Netflix productions will start, but specific information will be disclosed later. Does the absolute dream role exist for you? L. Mandoki: I’m Hungarian on my mother’s side, as well as my father’s side, and thus have a migrant background. My family’s history is significantly coined by the history of the 20th century, the First and Second World War and especially by the Cold War and the Iron Curtain. It interests me to find out what it must have meant to my dad to leave his home and family at the young age of 21, as well as to my grandparents 20 years earlier. I would love to approximate this topic through my work. It would be my dream to tell about these stories and experiences through my characters. I believe that actors have the task to make topics and emotions accessible that are difficult to deal with in everyday life. When I achieve this, I’m happy.

Want to See Lara Mandoki on screen? At the end of July of this year, Lara shot ICH UND R, a fictional social satire about the murdered fashion designer Rudolph Moshammer from Munich. Other actors in this interesting project are Hannelore Elsner and Robert Stadlober. An air date is planned for 2018. Stay tuned! Another current project is VÄTER UND SÖHNE – a series that is shot in Munich. In the drama, Lara embodies the young Lisa who comes in between a father-son conflict.