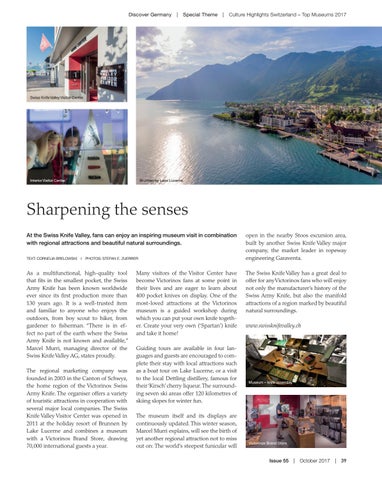 As a multifunctional, high-quality tool that fits in the smallest pocket, the Swiss Army Knife has been known worldwide ever since its first production more than 130 years ago. It is a well-trusted item and familiar to anyone who enjoys the outdoors, from boy scout to hiker, from gardener to fisherman. “There is in effect no part of the earth where the Swiss Army Knife is not known and available,” Marcel Murri, managing director of the Swiss Knife Valley AG, states proudly. The regional marketing company was founded in 2003 in the Canton of Schwyz, the home region of the Victorinox Swiss Army Knife. The organiser offers a variety of touristic attractions in cooperation with several major local companies. The Swiss Knife Valley Visitor Center was opened in 2011 at the holiday resort of Brunnen by Lake Lucerne and combines a museum with a Victorinox Brand Store, drawing 70,000 international guests a year.

Many visitors of the Visitor Center have become Victorinox fans at some point in their lives and are eager to learn about 400 pocket knives on display. One of the most-loved attractions at the Victorinox museum is a guided workshop during which you can put your own knife together. Create your very own (‘Spartan’) knife and take it home! Guiding tours are available in four languages and guests are encouraged to complete their stay with local attractions such as a boat tour on Lake Lucerne, or a visit to the local Dettling distillery, famous for their ‘Kirsch’ cherry liqueur. The surrounding seven ski areas offer 120 kilometres of skiing slopes for winter fun. The museum itself and its displays are continuously updated. This winter season, Marcel Murri explains, will see the birth of yet another regional attraction not to miss out on: The world’s steepest funicular will

open in the nearby Stoos excursion area, built by another Swiss Knife Valley major company, the market leader in ropeway engineering Garaventa. The Swiss Knife Valley has a great deal to offer for any Victorinox fans who will enjoy not only the manufacturer’s history of the Swiss Army Knife, but also the manifold attractions of a region marked by beautiful natural surroundings. www.swissknifevalley.ch