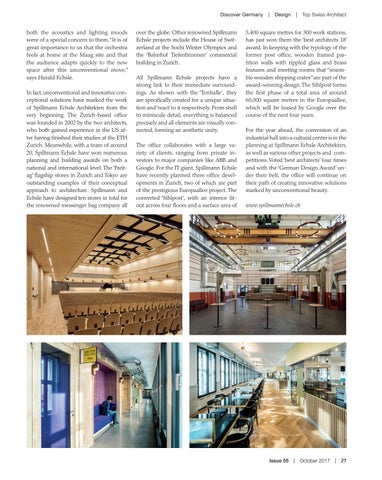 both the acoustics and lighting moods were of a special concern to them.“It is of great importance to us that the orchestra feels at home at the Maag site and that the audience adapts quickly to the new space after this unconventional move,” says Harald Echsle. In fact, unconventional and innovative conceptional solutions have marked the work of Spillmann Echsle Architekten from the very beginning. The Zurich-based office was founded in 2002 by the two architects, who both gained experience in the US after having finished their studies at the ETH Zurich. Meanwhile, with a team of around 20, Spillmann Echsle have won numerous planning and building awards on both a national and international level. The ‘Freitag’ flagship stores in Zurich and Tokyo are outstanding examples of their conceptual approach to architecture. Spillmann and Echsle have designed ten stores in total for the renowned messenger bag company all

over the globe. Other renowned Spillmann Echsle projects include the House of Switzerland at the Sochi Winter Olympics and the ‘Bahnhof Tiefenbrunnen’ commercial building in Zurich. All Spillmann Echsle projects have a strong link to their immediate surroundings. As shown with the ‘Tonhalle’, they are specifically created for a unique situation and ‘react’ to it respectively. From shell to miniscule detail, everything is balanced precisely and all elements are visually connected, forming an aesthetic unity. The office collaborates with a large variety of clients, ranging from private investors to major companies like ABB and Google. For the IT giant, Spillmann Echsle have recently planned three office developments in Zurich, two of which are part of the prestigious Europaallee project. The converted ‘Sihlpost’, with an interior fitout across four floors and a surface area of

5,400 square metres for 300 work stations, has just won them the ‘best architects 18’ award. In keeping with the typology of the former post office, wooden framed partition walls with rippled glass and brass features and meeting rooms that “resemble wooden shipping crates”are part of the award-winning design. The Sihlpost forms the first phase of a total area of around 60,000 square metres in the Europaallee, which will be leased by Google over the course of the next four years. For the year ahead, the conversion of an industrial hall into a cultural centre is in the planning at Spillmann Echsle Architekten, as well as various other projects and competitions. Voted ‘best architects’ four times and with the ‘German Design Award’ under their belt, the office will continue on their path of creating innovative solutions marked by unconventional beauty. www.spillmannechsle.ch