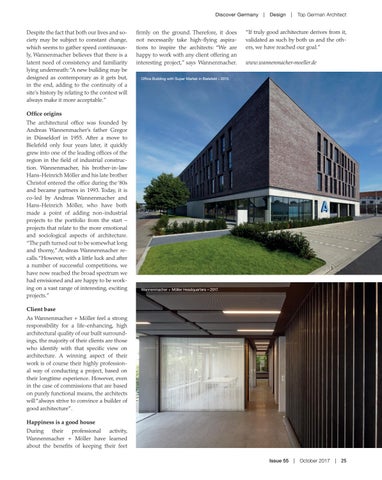 Despite the fact that both our lives and society may be subject to constant change, which seems to gather speed continuously, Wannenmacher believes that there is a latent need of consistency and familiarity lying underneath: “A new building may be designed as contemporary as it gets but, in the end, adding to the continuity of a site’s history by relating to the context will always make it more acceptable.”

firmly on the ground. Therefore, it does not necessarily take high-flying aspirations to inspire the architects: “We are happy to work with any client offering an interesting project,” says Wannenmacher.

“If truly good architecture derives from it, validated as such by both us and the others, we have reached our goal.” www.wannenmacher-moeller.de

Office origins The architectural office was founded by Andreas Wannenmacher’s father Gregor in Düsseldorf in 1955. After a move to Bielefeld only four years later, it quickly grew into one of the leading offices of the region in the field of industrial construction. Wannenmacher, his brother-in-law Hans-Heinrich Möller and his late brother Christof entered the office during the ‘80s and became partners in 1993. Today, it is co-led by Andreas Wannenmacher and Hans-Heinrich Möller, who have both made a point of adding non-industrial projects to the portfolio from the start – projects that relate to the more emotional and sociological aspects of architecture. “The path turned out to be somewhat long and thorny,” Andreas Wannenmacher recalls. “However, with a little luck and after a number of successful competitions, we have now reached the broad spectrum we had envisioned and are happy to be working on a vast range of interesting, exciting projects.”

Client base As Wannenmacher + Möller feel a strong responsibility for a life-enhancing, high architectural quality of our built surroundings, the majority of their clients are those who identify with that specific view on architecture. A winning aspect of their work is of course their highly professional way of conducting a project, based on their longtime experience. However, even in the case of commissions that are based on purely functional means, the architects will “always strive to convince a builder of good architecture”. Happiness is a good house During their professional activity, Wannenmacher + Möller have learned about the benefits of keeping their feet Issue 55  |  October 2017  |  25