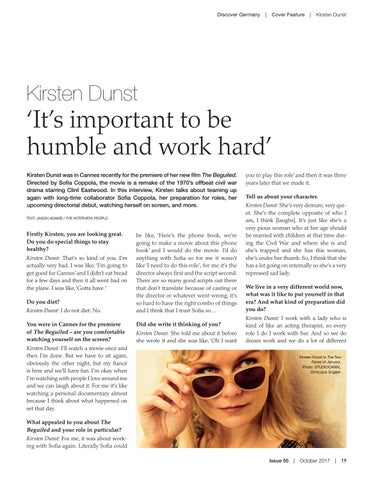 ‘It’s important to be humble and work hard’ Kirsten Dunst was in Cannes recently for the premiere of her new film The Beguiled. Directed by Sofia Coppola, the movie is a remake of the 1970’s offbeat civil war drama starring Clint Eastwood. In this interview, Kirsten talks about teaming up again with long-time collaborator Sofia Coppola, her preparation for roles, her upcoming directorial debut, watching herself on screen, and more. TEXT: JASON ADAMS / THE INTERVIEW PEOPLE

Firstly Kirsten, you are looking great. Do you do special things to stay healthy? Kirsten Dunst: That’s so kind of you. I’m actually very bad. I was like, ‘I’m going to get good for Cannes’ and I didn’t eat bread for a few days and then it all went bad on the plane. I was like, ‘Gotta have.’ Do you diet? Kirsten Dunst: I do not diet. No. You were in Cannes for the premiere of The Beguiled – are you comfortable watching yourself on the screen? Kirsten Dunst: I’ll watch a movie once and then I’m done. But we have to sit again, obviously the other night, but my fiancé is here and we’ll have fun. I’m okay when I’m watching with people I love around me and we can laugh about it. For me it’s like watching a personal documentary almost because I think about what happened on set that day.

be like, ‘Here’s the phone book, we’re going to make a movie about this phone book’ and I would do the movie. I’d do anything with Sofia so for me it wasn’t like ‘I need to do this role’, for me it’s the director always first and the script second. There are so many good scripts out there that don’t translate because of casting or the director or whatever went wrong, it’s so hard to have the right combo of things and I think that I trust Sofia so… Did she write it thinking of you? Kirsten Dunst: She told me about it before she wrote it and she was like, ‘Oh I want

you to play this role’ and then it was three years later that we made it. Tell us about your character. Kirsten Dunst: She’s very demure, very quiet. She’s the complete opposite of who I am, I think [laughs]. It’s just like she’s a very pious woman who at her age should be married with children at that time during the Civil War and where she is and she’s trapped and she has this woman, she’s under her thumb. So, I think that she has a lot going on internally so she’s a very repressed sad lady. We live in a very different world now, what was it like to put yourself in that era? And what kind of preparation did you do? Kirsten Dunst: I work with a lady who is kind of like an acting therapist, so every role I do I work with her. And so we do dream work and we do a lot of different Kirsten Dunst in The Two Faces of January. Photo: STUDIOCANAL 2014/Jack English

What appealed to you about The Beguiled and your role in particular? Kirsten Dunst: For me, it was about working with Sofia again. Literally Sofia could Issue 55  |  October 2017  |  19