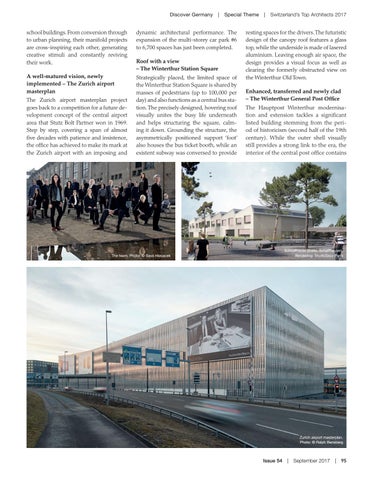 school buildings. From conversion through to urban planning, their manifold projects are cross-inspiring each other, generating creative stimuli and constantly reviving their work.

dynamic architectural performance. The expansion of the multi-storey car park #6 to 6,700 spaces has just been completed.

Strategically placed, the limited space of the Winterthur Station Square is shared by masses of pedestrians (up to 100,000 per day) and also functions as a central bus station. The precisely designed, hovering roof visually unites the busy life underneath and helps structuring the square, calming it down. Grounding the structure, the asymmetrically positioned support ‘foot’ also houses the bus ticket booth, while an existent subway was conversed to provide

The Zurich airport masterplan project goes back to a competition for a future development concept of the central airport area that Stutz Bolt Partner won in 1969. Step by step, covering a span of almost five decades with patience and insistence, the office has achieved to make its mark at the Zurich airport with an imposing and

Roof with a view – The Winterthur Station Square

resting spaces for the drivers. The futuristic design of the canopy roof features a glass top, while the underside is made of lasered aluminium. Leaving enough air space, the design provides a visual focus as well as clearing the formerly obstructed view on the Winterthur Old Town. Enhanced, transferred and newly clad – The Winterthur General Post Office The Hauptpost Winterthur modernisation and extension tackles a significant listed building stemming from the period of historicism (second half of the 19th century). While the outer shell visually still provides a strong link to the era, the interior of the central post office contains