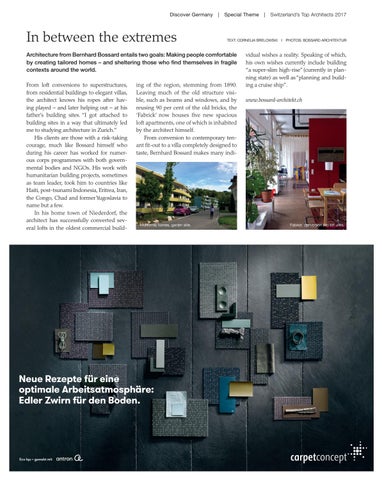 In between the extremes

Architecture from Bernhard Bossard entails two goals: Making people comfortable by creating tailored homes – and sheltering those who find themselves in fragile contexts around the world. From loft conversions to superstructures, from residential buildings to elegant villas, the architect knows his ropes after having played – and later helping out – at his father’s building sites. “I got attached to building sites in a way that ultimately led me to studying architecture in Zurich.” His clients are those with a risk-taking courage, much like Bossard himself who during his career has worked for numerous corps programmes with both governmental bodies and NGOs. His work with humanitarian building projects, sometimes as team leader, took him to countries like Haiti, post-tsunami Indonesia, Eritrea, Iran, the Congo, Chad and former Yugoslavia to name but a few. In his home town of Niederdorf, the architect has successfully converted several lofts in the oldest commercial build-

ing of the region, stemming from 1890. Leaving much of the old structure visible, such as beams and windows, and by reusing 90 per cent of the old bricks, the ‘Fabrick’ now houses five new spacious loft apartments, one of which is inhabited by the architect himself. From conversion to contemporary tenant fit-out to a villa completely designed to taste, Bernhard Bossard makes many indi-

vidual wishes a reality. Speaking of which, his own wishes currently include building “a super-slim high-rise” (currently in planning state) as well as “planning and building a cruise ship”. www.bossard-architekt.ch