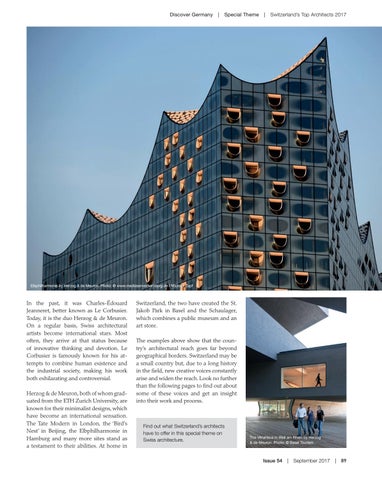 In the past, it was Charles-Édouard Jeanneret, better known as Le Corbusier. Today, it is the duo Herzog &amp; de Meuron. On a regular basis, Swiss architectural artists become international stars. Most often, they arrive at that status because of innovative thinking and devotion. Le Corbusier is famously known for his attempts to combine human existence and the industrial society, making his work both exhilarating and controversial. Herzog &amp; de Meuron, both of whom graduated from the ETH Zurich University, are known for their minimalist designs, which have become an international sensation. The Tate Modern in London, the ‘Bird’s Nest’ in Beijing, the Elbphilharmonie in Hamburg and many more sites stand as a testament to their abilities. At home in

Switzerland, the two have created the St. Jakob Park in Basel and the Schaulager, which combines a public museum and an art store. The examples above show that the country’s architectural reach goes far beyond geographical borders. Switzerland may be a small country but, due to a long history in the field, new creative voices constantly arise and widen the reach. Look no further than the following pages to find out about some of these voices and get an insight into their work and process.

Find out what Switzerland’s architects have to offer in this special theme on Swiss architecture.