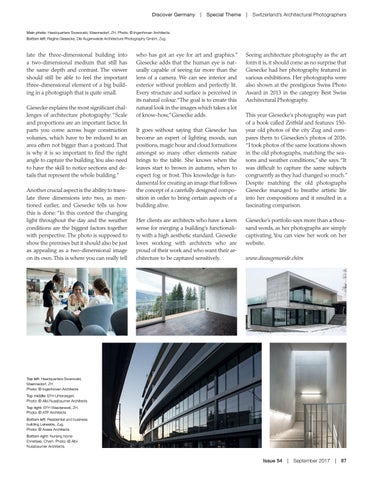 late the three-dimensional building into a two-dimensional medium that still has the same depth and contrast. The viewer should still be able to feel the important three-dimensional element of a big building in a photograph that is quite small. Giesecke explains the most significant challenges of architecture photography: “Scale and proportions are an important factor. In parts you come across huge construction volumes, which have to be reduced to an area often not bigger than a postcard. That is why it is so important to find the right angle to capture the building. You also need to have the skill to notice sections and details that represent the whole building.” Another crucial aspect is the ability to translate three dimensions into two, as mentioned earlier, and Giesecke tells us how this is done: “In this context the changing light throughout the day and the weather conditions are the biggest factors together with perspective. The photo is supposed to show the premises but it should also be just as appealing as a two-dimensional image on its own. This is where you can really tell

who has got an eye for art and graphics.” Giesecke adds that the human eye is naturally capable of seeing far more than the lens of a camera. We can see interior and exterior without problem and perfectly lit. Every structure and surface is perceived in its natural colour.“The goal is to create this natural look in the images which takes a lot of know-how,” Giesecke adds. It goes without saying that Giesecke has become an expert of lighting moods, sun positions, magic hour and cloud formations amongst so many other elements nature brings to the table. She knows when the leaves start to brown in autumn, when to expect fog or frost. This knowledge is fundamental for creating an image that follows the concept of a carefully designed composition in order to bring certain aspects of a building alive. Her clients are architects who have a keen sense for merging a building’s functionality with a high aesthetic standard. Giesecke loves working with architects who are proud of their work and who want their architecture to be captured sensitively.

Seeing architecture photography as the art form it is, it should come as no surprise that Giesecke had her photography featured in various exhibitions. Her photographs were also shown at the prestigious Swiss Photo Award in 2013 in the category Best Swiss Architectural Photography. This year Giesecke’s photography was part of a book called Zeitbild and features 150year old photos of the city Zug and compares them to Gieseckes’s photos of 2016. “I took photos of the same locations shown in the old photographs, matching the seasons and weather conditions,” she says. “It was difficult to capture the same subjects congruently as they had changed so much.” Despite matching the old photographs Giesecke managed to breathe artistic life into her compositions and it resulted in a fascinating comparison. Giesecke’s portfolio says more than a thousand words, as her photographs are simply captivating. You can view her work on her website. www.dieaugenweide.ch/en