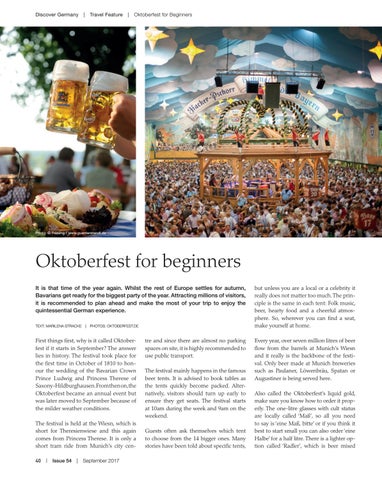 Oktoberfest for beginners It is that time of the year again. Whilst the rest of Europe settles for autumn, Bavarians get ready for the biggest party of the year. Attracting millions of visitors, it is recommended to plan ahead and make the most of your trip to enjoy the quintessential German experience. TEXT: MARILENA STRACKE  |  PHOTOS: OKTOBERFEST.DE

First things first, why is it called Oktoberfest if it starts in September? The answer lies in history. The festival took place for the first time in October of 1810 to honour the wedding of the Bavarian Crown Prince Ludwig and Princess Therese of Saxony-Hildburghausen.From then on,the Oktoberfest became an annual event but was later moved to September because of the milder weather conditions. The festival is held at the Wiesn, which is short for Theresienwiese and this again comes from Princess Therese. It is only a short tram ride from Munich’s city cen40  |  Issue 54  |  September 2017

tre and since there are almost no parking spaces on site, it is highly recommended to use public transport. The festival mainly happens in the famous beer tents. It is advised to book tables as the tents quickly become packed. Alternatively, visitors should turn up early to ensure they get seats. The festival starts at 10am during the week and 9am on the weekend. Guests often ask themselves which tent to choose from the 14 bigger ones. Many stories have been told about specific tents,

but unless you are a local or a celebrity it really does not matter too much. The principle is the same in each tent: Folk music, beer, hearty food and a cheerful atmosphere. So, wherever you can find a seat, make yourself at home. Every year, over seven million litres of beer flow from the barrels at Munich’s Wiesn and it really is the backbone of the festival. Only beer made at Munich breweries such as Paulaner, Löwenbräu, Spatan or Augustiner is being served here. Also called the Oktoberfest’s liquid gold, make sure you know how to order it properly. The one-litre glasses with cult status are locally called ‘Maß’, so all you need to say is ‘eine Maß, bitte’ or if you think it best to start small you can also order ‘eine Halbe’ for a half litre. There is a lighter option called ‘Radler’, which is beer mixed