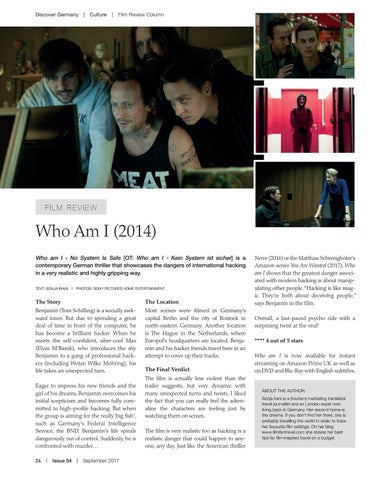 Who Am I (2014) Who am I - No System Is Safe [OT: Who am I - Kein System ist sicher] is a contemporary German thriller that showcases the dangers of international hacking in a very realistic and highly gripping way. TEXT: SONJA IRANI  I  PHOTOS: SONY PICTURES HOME ENTERTAINMENT

Benjamin (Tom Schilling) is a socially awkward loner. But due to spending a great deal of time in front of the computer, he has become a brilliant hacker. When he meets the self-confident, uber-cool Max (Elyas M’Barek), who introduces the shy Benjamin to a gang of professional hackers (including Wotan Wilke Möhring), his life takes an unexpected turn.

Most scenes were filmed in Germany’s capital Berlin and the city of Rostock in north-eastern Germany. Another location is The Hague in the Netherlands, where Europol’s headquarters are located. Benjamin and his hacker friends travel here in an attempt to cover up their tracks.

Eager to impress his new friends and the girl of his dreams, Benjamin overcomes his initial scepticism and becomes fully committed to high-profile hacking. But when the group is aiming for the really ‘big fish’, such as Germany’s Federal Intelligence Service, the BND, Benjamin’s life spirals dangerously out of control. Suddenly, he is confronted with murder… 24  |  Issue 54  |  September 2017

The Final Verdict The film is actually less violent than the trailer suggests, but very dynamic with many unexpected turns and twists. I liked the fact that you can really feel the adrenaline the characters are feeling just by watching them on screen. The film is very realistic too as hacking is a realistic danger that could happen to anyone, any day. Just like the American thriller

Nerve (2016) or the Matthias Schweighöfer’s Amazon series You Are Wanted (2017), Who am I shows that the greatest danger associated with modern hacking is about manipulating other people.“Hacking is like magic. They’re both about deceiving people,” says Benjamin in the film. Overall, a fast-paced psycho ride with a surprising twist at the end! **** 4 out of 5 stars Who am I is now available for instant streaming on Amazon Prime UK as well as on DVD and Blu-Ray with English subtitles. ABOUT THE AUTHOR: Sonja Irani is a (tourism) marketing translator, travel journalist and ex London expat now living back in Germany. Her second home is the cinema. If you don’t find her there, she is probably travelling the world in order to trace her favourite film settings. On her blog www.filmfantravel.com she shares her best tips for film-inspired travel on a budget.