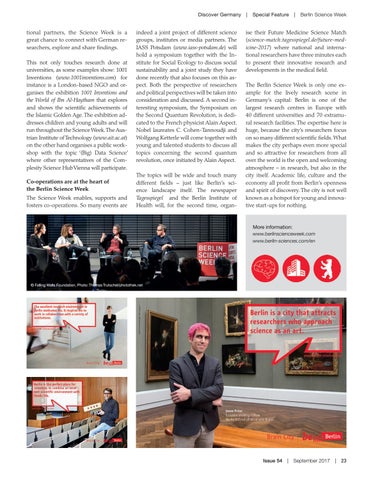 tional partners, the Science Week is a great chance to connect with German researchers, explore and share findings. This not only touches research done at universities, as some examples show: 1001 Inventions (www.1001inventions.com) for instance is a London-based NGO and organises the exhibition 1001 Inventions and the World of Ibn Al-Haytham that explores and shows the scientific achievements of the Islamic Golden Age. The exhibition addresses children and young adults and will run throughout the Science Week. The Austrian Institute of Technology (www.ait.ac.at) on the other hand organises a public workshop with the topic ‘(Big) Data Science’ where other representatives of the Complexity Science Hub Vienna will participate. Co-operations are at the heart of the Berlin Science Week The Science Week enables, supports and fosters co-operations. So many events are

indeed a joint project of different science groups, institutes or media partners. The IASS Potsdam (www.iass-potsdam.de) will hold a symposium together with the Institute for Social Ecology to discuss social sustainability and a joint study they have done recently that also focuses on this aspect. Both the perspective of researchers and political perspectives will be taken into consideration and discussed. A second interesting symposium, the Symposium on the Second Quantum Revolution, is dedicated to the French physicist Alain Aspect. Nobel laureates C. Cohen-Tannoudji and Wolfgang Ketterle will come together with young and talented students to discuss all topics concerning the second quantum revolution, once initiated by Alain Aspect. The topics will be wide and touch many different fields – just like Berlin’s science landscape itself. The newspaper Tagesspiegel and the Berlin Institute of Health will, for the second time, organ-

ise their Future Medicine Science Match (science-match.tagesspiegel.de/future-medicine-2017) where national and international researchers have three minutes each to present their innovative research and developments in the medical field. The Berlin Science Week is only one example for the lively research scene in Germany’s capital: Berlin is one of the largest research centres in Europe with 40 different universities and 70 extramural research facilities. The expertise here is huge, because the city’s researchers focus on so many different scientific fields. What makes the city perhaps even more special and so attractive for researchers from all over the world is the open and welcoming atmosphere – in research, but also in the city itself. Academic life, culture and the economy all profit from Berlin’s openness and spirit of discovery. The city is not well known as a hotspot for young and innovative start-ups for nothing.