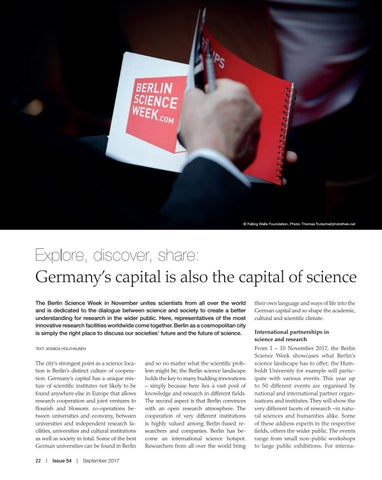 Explore, discover, share: Germany’s capital is also the capital of science The Berlin Science Week in November unites scientists from all over the world and is dedicated to the dialogue between science and society to create a better understanding for research in the wider public. Here, representatives of the most innovative research facilities worldwide come together. Berlin as a cosmopolitan city is simply the right place to discuss our societies’ future and the future of science.

their own language and ways of life into the German capital and so shape the academic, cultural and scientific climate.

From 1 – 10 November 2017, the Berlin Science Week showcases what Berlin’s science landscape has to offer; the Humboldt University for example will participate with various events. This year up to 50 different events are organised by national and international partner organisations and institutes. They will show the very different facets of research –in natural sciences and humanities alike. Some of these address experts in the respective fields, others the wider public. The events range from small non-public workshops to large public exhibitions. For interna-

and so no matter what the scientific problem might be, the Berlin science landscape holds the key to many budding innovations – simply because here lies a vast pool of knowledge and research in different fields. The second aspect is that Berlin convinces with an open research atmosphere. The cooperation of very different institutions is highly valued among Berlin-based researchers and companies. Berlin has become an international science hotspot. Researchers from all over the world bring

International partnerships in science and research